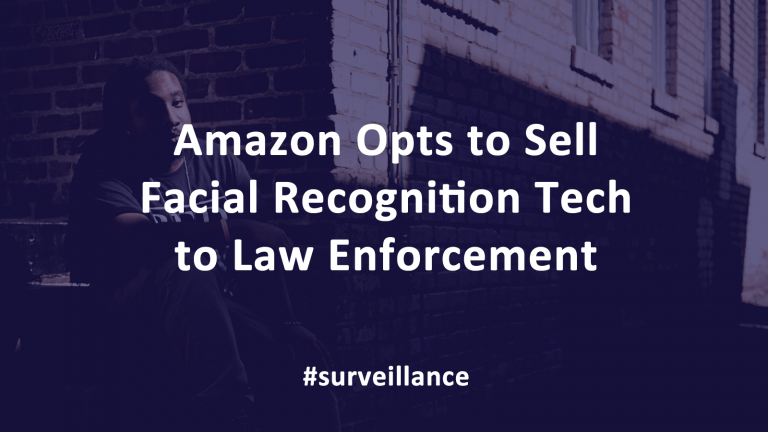 The vote occurred at the Amazon annual meeting in Seattle, Washington on Wednesday, June 28. There were two nonbinding proposals up for consideration. The first proposal sought to ban sales of Amazon Rekognition to police and government agencies unless its board concluded that the technology would not be involved in human rights violations. Only 2.4% of shareholders voted in favor of the first proposal, far below the necessary 50% required to pass.

Amazon tried to have the Securities and Exchange Commission (SEC) stop the votes on the proposals. The SEC instead stopped Amazon from blocking the votes. A second proposal also failed to meet the 5% threshold for it to be re-introduced to shareholders. Just over 27% of shareholders voted in favor of the second proposal. The second proposal wanted Amazon to commission an independent study examining the extent to which Amazon Rekognition may endanger civil liberties and privacy rights.

What is Facial Recognition?

Facial recognition is a form of biometrics. Facial features are analyzed to form a match between the scanned image and databases of known persons. Biometric surveillance includes identifying people by physical data like fingerprints, facial recognition, and iris scans. Obviously, it is not practical to conduct mass surveillance using fingerprints or iris scans. Biometrics are a form of authentication for security purposes, like entering a building. Many devices including most newer smartphones use biometrics as an optional way to control access.

What is Amazon Rekognition Used For?

Rekognition has several different uses. It can be used for video analysis to track an object in motion, like a ball, throughout a video. It can also be used to read text in videos. News agencies can use Rekognition to edit videos faster by using the technology to find certain people or spoken words in a long video clip. Facial recognition can be used to validate financial transactions. It can also be used for mass surveillance and policing activities and that’s where the controversy is.

The American Civil Liberties Union (ACLU) and M.I.T. Media Lab have both said the technology is inaccurate and may lead to wrongfully implicating minorities in crimes. There are also concerns from Amazon employees that Rekognition technology is already being used for mass surveillance with no public oversight, policy reviews, or restrictions.

Amazon recognition is used by the International Centre for Missing & Exploited Children and Marinus Analytics, an anti-human trafficking organization. However, Amazon already also works with law enforcement agencies and was exposed making a pitch to U.S. Immigration and Customs Enforcement (ICE.)

There are differences in public policy amongst local and state agencies. The city of Orlando, Florida is testing Amazon Rekognition using live video feeds from citywide surveillance cameras While the city of San Francisco recently prohibited the use of mass facial surveillance technology by the police or other city agencies.

Microsoft has called for increased government regulation of facial recognition technology and its many uses citing a potential for abuse. Both Microsoft and Google have refused to work with certain government agencies.

Google made its position clear in a post, “However, like many technologies with multiple uses, facial recognition merits careful consideration to ensure its use is aligned with our principles and values, and avoids abuse and harmful outcomes,” The post goes on to state that,”…unlike some other companies, Google Cloud has chosen not to offer general-purpose facial recognition APIs before working through important technology and policy questions.”

The Chinese government routinely surveils their own citizens on public streets. Citizen’s faces may be shown on large public screens when they jaywalk across busy streets. To counteract anyone trying to defeat facial recognition technologies, China also uses Watrix Gait Recognition technology which claims to be more accurate.