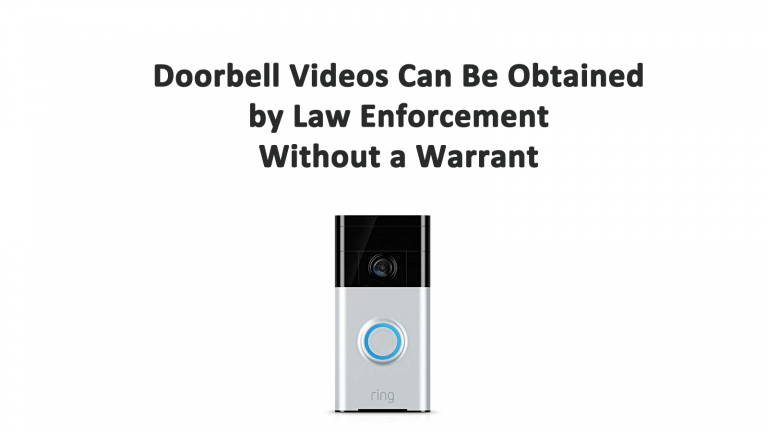 Amazon Ring Doorbell Videos Can Be Used by Law Enforcement

Ring video cameras are an easy way for homeowners to watch for deliveries and to see who is on their doorstep by using an app. Ring makes doorbell cams as well as indoor security cameras. Camera owners can also record what is happening at their door and anything else that is within view of the camera. Privacy advocates are concerned that Ring doorbell cameras serve to surveil citizens who pass near a doorbell camera, without their knowledge or consent. For example, Ring doorbell cameras capture footage of people walking a dog, driving down the street, or delivering packages.

Ring actively markets to local police agencies. When a police department partners with Ring, the police receive free access to Ring’s Law Enforcement Neighborhood Portal. The portal lets a partner law enforcement agency see a map of who has Ring video products installed so that can request access to video footage from them.

According to an April 22, 2019 tally from Gizmodo, over 225 police agencies in the United States are in partnerships with Ring. Deals can also include subsidized costs for cameras encouraging police to give them out for free to residents.

In January 2019, it was revealed that Ring employees had access to video feeds from customers’ Ring security cameras. Ring research and development employees in the Ukraine were tasked with tagging objects seen in footage from household security cameras and doorbells video feeds to help the camera’s algorithm learn to recognize images.

Amazon acquired Ring in February 2018 for over $1 billion. The company recently voted to go forth with selling their facial recognition technologies to domestic and international law enforcement agencies. Amazon calls their product, Facial Rekognition. It is used to identify citizens in crowds as they traverse public spaces. Other tech giants like Apple and Google have declined to sell their facial recognition products to law enforcement agencies citing lack of regulations, disclosure to citizens, and limits set by lawmakers.

Ring Camera owners can monitor and record video footage from their homes using a mobile app. Neighbors is a free app for camera owners which serves as a neighborhood watch app with posts of video footage captured by Ring cameras. Ring hired news editors that add 911 call data into the app for real-time, unconfirmed crime alerts, adding a fear factor for app users.

Police can request video camera footage by contacting camera owners through Neighbors. If the police want to access video, they issue a request using a message prescripted by Ring employees. Ring sends alerts to camera owners within the vicinity asking them to share videos captured by their cameras. Ring customers can opt-out of alerts and review videos before choosing to send them to police.

Amazon is helping police convince people to give them their Ring camera footage. The portal also lets police send messages to camera owners asking for copies of videos recorded at their homes or wherever the Ring cameras are installed. Amazon writes all of the correspondence sent by police to residents. Police do not need a warrant to initiate the request, but they do need permission from the camera owner.

Police must obtain the camera owner’s permission to access video from one of their cameras. But, if a Ring camera owner decides against cooperating with the police request, police can contact Amazon directly to obtain the video footage ignoring the declined request. And a subpoena allegedly isn’t required. The Fresno County Sheriff’s Office is one of agencies in a partnership with Amazon and Ring. “If we ask within 60 days of the recording and as long as it’s been uploaded to the cloud, then Ring can take it out of the cloud and send it to us legally so that we can use it as part of our investigation,” said Tony Botti, Public Information Officer for the Fresno County Sheriff’s Office. He went on to say that “The consumer knows what they’re getting into. If you’re a good upstanding person who is doing things lawfully, nobody has concerns.”