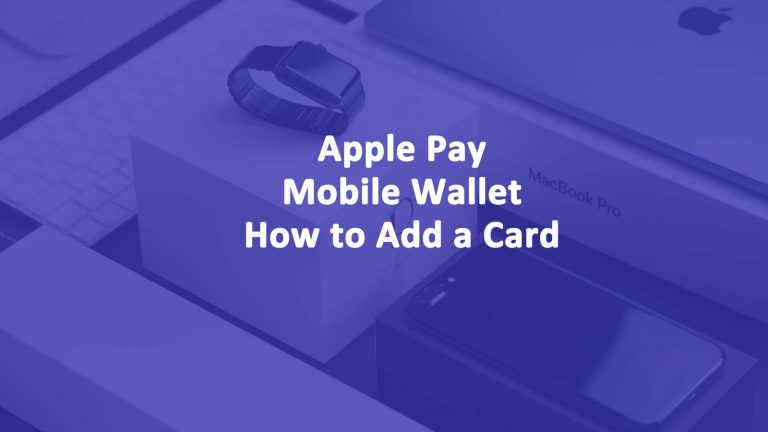 Apple Pay mobile wallet users can add a card to store payment methods like credit cards and debit cards after they set up their iPhone mobile wallet. Apple Pay mobile wallet can also save store loyalty cards, tickets for transportation, concerts, events, and films. Using a mobile wallet like Apple Pay is a more secure form of online and in person shopping because the retailer does not receive your full card numbers and no chance of misplacing the card or having it stolen.

How to Pay in Stores with Apple Pay Mobile Wallet

Some people worry that using a mobile wallet is too complicated to use and that swiping or dipping a physical is just easier. While it is true that physical payment cards are widely accepted and mobile wallets are accepted by about 50 percent of retailers, paying with Apple Pay mobile wallet is just as easy to use. To pay in stores, simply open Apple wallet, choose the payment method to use, and tap your iPhone to the reader.

READ: How to Browse the Web Anonymously on an iPhone

Apple Wallet, also called Apple Pay formerly called Apple Passbook, was introduced by Apple in late 2014 along with the then new iPhone 6. It is preinstalled on all Apple iPhones and cannot be removed unless the phone is jailbroken. iPhone owners use Apple Wallet to pay online or as a contactless form of payment in stores wherever it is accepted. No website, app, or payment method is 100% secure against hackers except paying in cash. Using a mobile wallet is more secure than presenting a physical card at the checkout.

Apple Wallet is installed on all iPhones since iOS 8.1 but does not work on iPads. iPhone users can pay with their iPhone or iWatch. The app cannot be deleted.

Globally, 48 percent of iPhone owners, about 441 million people, use Apple Pay as a mobile wallet according to Statistica. The adoption rate is much higher outside of the United States because of wider acceptance by retailers and its usage for public transportation tickets in China, Japan, UK, and Russia. Only about fifty percent of businesses in the United States accept Apple Wallet and only around 18% of US iPhone owners use Apple Wallet on their iPhone on a regular basis with about three percent using it weekly for payments.

Over half of US smartphone users, about 65%, avoid using mobile wallets because of security concerns. Shoppers are concerned that mobile wallet apps are not secure or that the phone may be lost, stolen, or hacked. That’s why it is so important to enable security features that most smartphones have like fingerprint logins, lock screen passwords, or facial recognition.

Mobile wallets are generally a way to shop with your smartphone securely method because payment cards do not have to be handed to a cashier swiped in a payment card reader. There is no chance of losing the physical card either by leaving it behind or having it stolen.

Cards that are not added to mobile wallet can be stolen by hackers using a card reader. Thieves use a portable device that reads the numbers off a credit card the same way a cash point-of-sale (POS) terminal does. They then take the data from the card sniffer and reproduce a physical card with the stolen card numbers printed on it and also stored on the magnetic strip. Hackers also make money by selling large caches of stolen payment card information on the dark web. One night, my friend’s card numbers were stolen while we walked down the crowded Las Vegas Strip. Her card was presented for two purchases, hundreds of miles away before we even know it had been lifted. Her card was on her person the entire time. The numbers had been gleaned by someone we passed by while walking.

READ: iPhone Upgrade – How to Safeguard Your Money and Wipe Data

Using mobile wallets also gives more data privacy protection for shoppers. Retailers track shopper behavior through their use of their shopping websites, social media, and your payment information. When you add a card to Apple Pay Wallet the retailer does not receive your full card numbers and cannot track your shopping history through credit card partners or social media advertising platforms like Facebook and Instagram.

Using a mobile wallet to pay online and in stores can help protect your payment card number from being stolen in a data breach on the retailer’s end. Hackers an infect the IT servers used to run POS terminals with malware. Malware can be used to steal personal data and payment card numbers from thousands of people as was the case in the Wawa data breach. In that malware attack, the POS terminals at stores and fuel pumps were compromised at all 850 Wawa locations over a period of ten months. Payment card and personal customer information was stolen.

Apple Wallet can be used to store payment cards including credit cards and debit cards, boarding passes, public transportation tickets, event tickets, and store loyalty cards. iPhone owners in the UK can use Apple Wallet to store and access their driver’s license.

How to Add a Card to Apple Pay Wallet on iPhone

Apple Pay users can add a card to an iPhone by opening the app, navigating to the Add Card tab, and snapping a photo of the card.

How Do I Use Apple Wallet on iPhone?

Using Apple Wallet at the checkout register is as easy as using a credit card or debit card. It is also a more secure way to pay for purchases.

How do I Get to my Apple Wallet?

The Apple Wallet App is preinstalled on iPhones since iOS 8.01. Apple Wallet cannot be deleted. To get to your Apple Wallet just open the app on your iPhone. The app icon should appear on your phone’s screen. If you cannot find it, look in a folder.

Apple iOS requires users to enable Apple TouchID (fingerprints) and a passcode on the iPhone and use them to authorize Apple Pay Wallet transactions. However, TouchID can be disabled for purchases after cards are added.

Can I Add Membership Cards to Apple Wallet?

Membership cards and store loyalty cards can all be added to Apple Pay Wallet as long as the card has a relationship with Apple. That means your bank must have a allow you to add your bank card to Apple Wallet before you are allowed to add it. Apple Wallet can be used to securely store payment cards, coupons, boarding passes, student ID cards, event tickets, train and bus tickets, store loyalty cards, membership cards, and driver’s licenses in some countries.