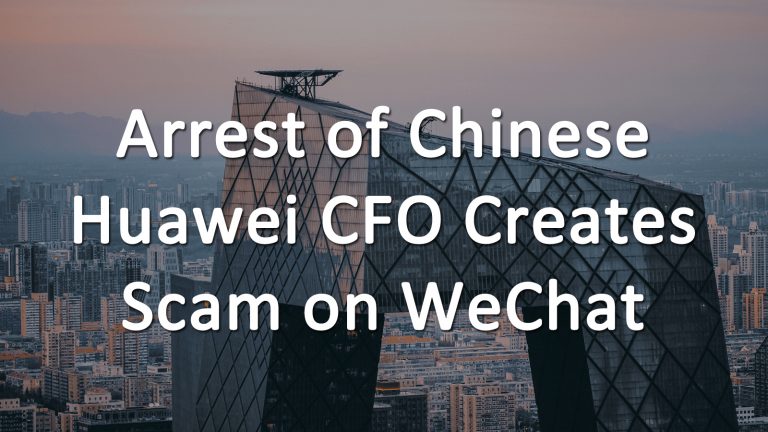 The arrest of Huawei’s (pronounced “wha-way”) CFO, Meng Wanzou, in Canada at the behest of the US government has been part of the news cycle for a while, as well as China’s aggravated response. The whole incident is a major confrontation in soft power between the two countries as both seek to test the limits of their influence. In a bid to show their seriousness, Chinese authorities have arrested a Canadian ex-diplomat in China although they claim his arrest is entirely unrelated to the fact that Canada (so far) doesn’t seem to be willing to release Ms. Meng. The outcome of this situation will set policy and send a strong message to the rest of the world. If Canada buckles to China’s will, it will show that even one of the United States’ oldest allies is willing to back down, whereas staying the course will demonstrate that China’s extra-territorial influence isn’t as grand as it thinks it is.

But where there’s a geopolitical flashpoint, there’s someone looking to make a quick buck. Though we can’t recommend trying to profit off of the Chinese government’s situation, as they’ll probably come after you. The following message has been sent to WeChat users, allegedly from Ms. Meng:

“Hello, I am MENG Wanzou. Currently, I have been detained by Canadian customs. I have limited use of my phone. Right now CIA is trying to get me into the hands of the US government. I bribed the guard of my room, and urgently need US$2000 to get out of here. Once I am out, I will reward you 200,000 shares of Huawei. I will be good on my word. if you are single, we can also discuss the important thing in life. The guard’s name is David, the account number is 52836153836252, swift 55789034. I will be good on my word.”

This message is extremely well-targeted and plays on the fears and narrative that the Chinese government has been pushing for this incident. A phishing attack like this has the chance to be extremely successful, as it plays on the national fears that have been percolating throughout the Chinese people. It is shockingly similar to a smishing attack that was sent out that claimed to be from Melania Trump asking for money as well. These sort of predatory attacks are extremely effective because of how easy they are to pull off, and how believable their message is. Do you know that the CIA isn’t trying to extradite Ms. Meng? A common attack against the United States is that it’s corrupt and its people are only after money. Why not buy into this attack and send some money?