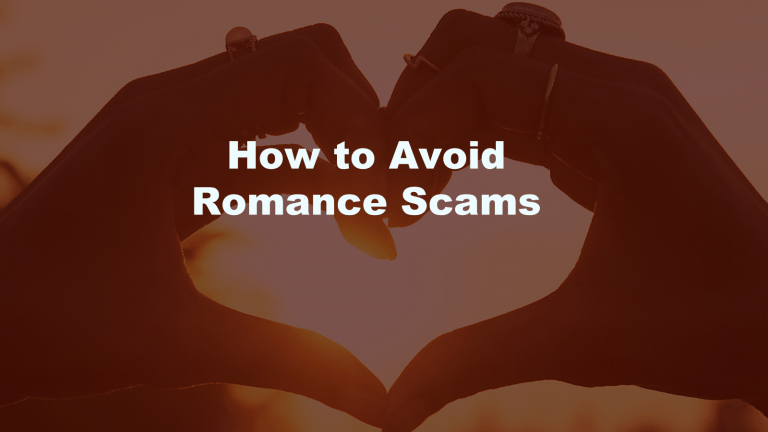 How to Avoid Romance Scams and Fraud

A romance scam is a type of imposter scam that preys upon those looking for romantic partners. The scammer gains the victim’s affection and then steals thier money or uses them to commit further fraud.

Romance scams rank number one on total reported losses. A notice from the US Federal Trade Commission (FTC) supplied some astonishing numbers about the cost of romance scams. Financial losses from romance scams are higher than from any other form of fraud in the US. The FTC reports that romance scams collected about $143 million from US citizens from reported 21,000 complaints. That’s a shocking median loss of $2,600 per scam victim, an figure seven times the median loss of any other form of fraud. An AARP survey found that 4 percent of U.S. adult respondents said they were victims of an online romance scam.

Scammers claim that they are abroad or in military service and cannot meet in person. They are only looking to eventually separate a suitor from their money or even recruit the victim into helping steal money from others.

Romance scams will cost you. People between the ages of 40 and 69 reported they were more likely to lose money to a romance scammer than other age brackets. However, those aged 70 and older lost more on a per case basis with a median loss of $10,000 each according to the FTC. Most of the victims paid scammers via wire transfers or sent gift cards.

What is a Romance Scam?

Romance scammers prey on vulnerable people who are looking for love. The number of people using online dating sites and apps spikes around Valentine’s Day and other major holidays. Hackers and scammer exploit people with tailored cyber attacks using the wealth of data gleaned from online dating profiles and social media accounts. They also set up their own bogus social media profiles or steal someone else’s identity to do so hoping to strengthen their believability with their victims.

Romantic scams are a subcategory of what the FTC labels as imposter scams. These include scammers who pose as business partners, IRS or other government officials, or tech support services. This type of scammer is usually out to steal money but they may do so by first gathering personal information about a victim that eventually gives them access to financial accounts.

Online dating sites experience a surge in activity as Valentine’s Day approaches each year. Scammers take advantage of this increased volume and set up fake dating profiles to establish online relationships with those looking for love. The scammers, of course, have no intention of establishing any meaningful relationship or never agree to meet in person.

It may take months for a romance scammer to forge a supposedly trusting online relationships with their victim before they ask for assistance, usually money for an emergency or transportation.

Could You Spot a Romance Scam?

Scammers use Impersonation and online trickery to steal from unsuspecting dates. They find victims through the use of dating websites and apps as well as social media sites like Facebook, Instagram, and Snapchat. Hackers use stolen credit cards to pay for dating app memberships to sites like Match and Tinder so they can post fake profiles. Once they meet a victim, the romance scammer moves the conversation off the app quickly in case they are is discovered and shut down by a paid online dating service. Personal Facebook and Instagram profiles help prove their identity to victims.

Anatomy of a Romance Scam

Scammers are patient and probably cultivating multiple victims simultaneously. Months of messaging about the victims’ lives builds trust. A romance scammer may even send the victim small gifts, as a cost of doing business, to help add credibility to the ruse.

A scammer may test the water by asking for a favor from the victim, like sending a gift card. Like all manipulators, the scammer tries to isolate the victim from their family and friends who are likely to see the reality of the situation.

Scammers need a way to money from victims without being tracked by law enforcement and may their victims can be turned into unknowing accomplices in a money laundering scheme. Romance fraud victims are many times converted into a money mule role. The scammer already has a trusting relationship with the romanced mule who is unlikely to steal money or ask for payment for their services.

The Department of Justice (DOJ) estimates that in 2018, 20 to 30 percent of romance victims were used as money mules. Money mules are used to assist in romance frauds as well as other scams such as identity theft, stolen tax returns, and grandparent frauds.

Follow the money as the saying goes when tracking fraud. Money mules help by transferring funds to the scammer’s bank accounts, often outside of the country. This obscures law enforcement action by adding a step in the money transfer process that moves the money off-shore and out of reach of officials’ jurisdiction. Most victims do not understand that they are aiding in an illegal activity but still they can end up in deep legal trouble.

What to Do If You’re the Victim of a Romance Scam?

Take any new relationship slowly. Ask meaningful questions and be wary of inconsistent answers. Do not give money or gifts to someone you have never met in person. Try to verify the person’s identity with image, phone number, and address searches. Tell your real friends or family about your potential romance. Objective points-of-view are not so blinded by emotion. If you suspect a romance scam, cut off all contact immediately.

People who suspect that they are being used as money mules should contact a Postal Inspector or FBI agent.