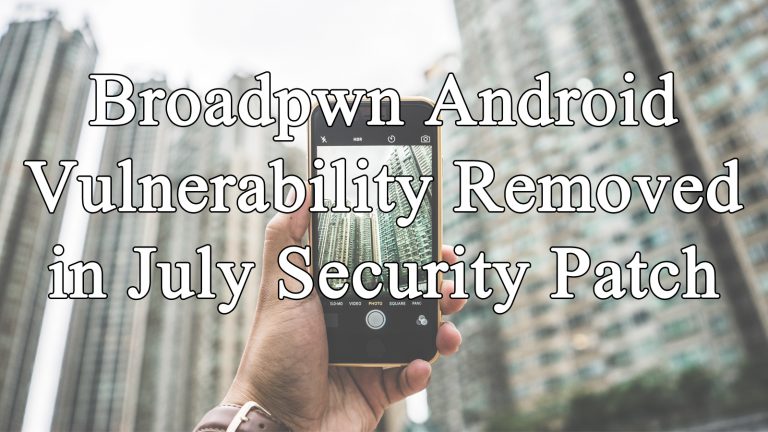 Google has issued a security patch this month to deal with the Broadpwn vulnerability found on their Android devices. This vulnerability would have allowed an attacker to remotely access and execute code and commands in their target devices. Broadpwn utilizes a known exploit of the wireless chips used in Android devices, namely the Broadcom BCM43xxx line of chips. The vulnerability was found by Exodus Intelligence, a cyber security research firm, which found it initially while investigating potential security breaches for Apple iPhones.

Apple products use the same chipset as their Android competitors, which means any devices with the chipset are vulnerable, regardless of the manufacturer. The chipset was used in the manufacture or iPhone, HTC, LG, Nexus, and all new Samsung models. Android and iPhone operating systems are heavily protected, with dozens of layers of encryption and defensive programming but their components are not. A similar exploit existed years ago for Apple MacBooks, their battery controllers were unprotected, meaning that a hacker could remotely access the computer through it. The Broadpwn exploit allowed a hacker unrestricted access to a phone via the entirely unguarded wifi chipset, by inserting modified code into the data it was passing along. While Google has announced a security patch for all devices, Apple has not and neither has Broadcom. This lack of response leaves a gaping hole in the security of Apple devices and any unpatched Android devices.

Google may be quicker to release a security patch in the wake up the massive security failure they had in 2016. That attack was by a program known as CopyCat, and it targeted Android devices. While the infections were primarily in Asia, specifically Southeast Asia, they did make it overseas to the United States. Over 280,000 Android devices in the United States were infected but more then 14,000,000 devices were infected worldwide.

The creators of CopyCat originally attempted to upload it to the Google Play Store, but it was caught by Google’s automated screening program, put in place to prevent this sort of attack. However CopyCat’s creators simply uploaded it to various third party app stores and marketplaces, and from there it spread rapidly. Allowing third party apps to be installed overrides Google’s security services, so CopyCat was installed unimpeded by any protective software active on the devices. CopyCat roots devices, literally encoding itself at the highest administrative level into the code that runs the infected system. This means that removing it is tedious and difficult, as it must be removed without damage anything else in the phone. It also means that a factory reset wouldn’t remove it, as once the device is rooted CopyCat would be able to hide from the wipe.

As is the case in many cyberattacks, the CopyCat attack is ineffectual against devices that are regularly updated and patched. The exploits that CopyCat used were years old, and had all been successfully patched. This means that most devices that fell victim to it were years from their last firmware or security update, which is a massive vulnerability. It is very important to keep any device up to date with its security definitions and firmware.