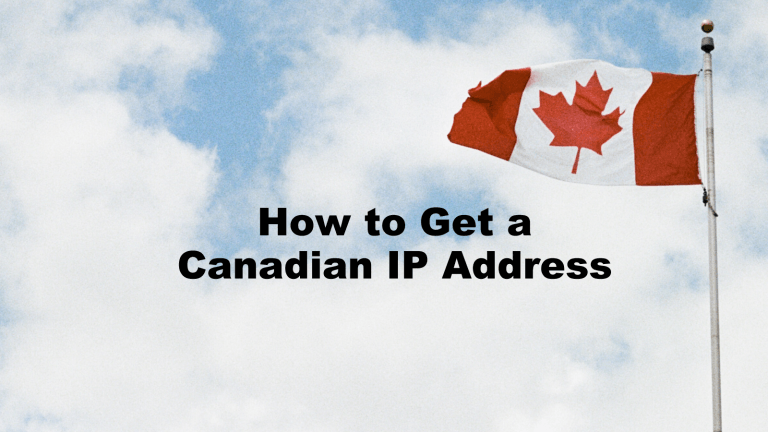 How Can I Change My IP Address to Canada? Get Canadian IP Address Outside Canada

You can get a Canadian IP address to make it appear that you’re in Canada so you can watch restricted online content like sports and television shows. Getting an IP address from Canada is the way to watch Canadian Netflix too. Expats often like to see news and sports from their home country, but the Canadian Radio-television and Telecommunications Commission (CRTC) restricts televised programming, including commercials, based on the IP address of the viewer.

What is an IP Address?

Your Internet Protocol address, called an IP address, is a numerical identifier assigned to all devices connected to the internet. They are assigned temporarily when a device connects online and hep route internet traffic to and from the device. It works the same as a physical address to your home or workplace. An IP address is assigned by your internet service provider (ISP) and indicates where the device is located. Many services like Netflix and websites, use a device’s IP address to determine what version of content should be shown. For example, if you connect to a website from a Canadian IP address, you may see prices in Canadian dollars with options for French and English text.

Canadian online content, television, sports, and other programming is different from foreign channels and you will need to an IP address from Canada to view it. With a Canadian IP address, you can watch channels like CTV, Global, TVA, and CityTV with Canadian overlays and commercials. This includes premium channels such as BBC Canada, CTV Comedy Channel, CTV Drama Channel, CTV News Channel, CTV Sci-Fi Channel, TVOne Canada, Leafs Nation Network, MAVTV Canada, and NBA TV Canada.

CRTC determines what television channels broadcast stations can offer and gives priority to Canadian channels. CRTC policy supports that the Canadian market would be overwhelmed by non-Canadian content and pricing. Some view this as censorship and use a VPN to view blocked content.

Canadian broadcasters cannot afford the expensive rates US networks pay for syndicated content. So CRTC rules also require that Canadian broadcasters must show the CTV signals, or other channel, of any show licensed from US networks during the same time slot. The broadcast along with all overlays and commercials must be the Canadian version of the same show and episode when available.
This is the reason Canadian viewers do not see American Super Bowl advertisements, even when watching a US network carried in Canada.

CRTC maintains a list of foreign-owned channels that are authorized for distribution. Cable and satellite companies may only broadcast foreign content in Canada if it is on the list. BBC World News, Beijing TV (China), and Euronews from France are some examples of approved channels.

A virtual private network, or VPN, is software or an app that lets you connect to the internet and routes your internet activity through servers in other locations or countries. A VPN makes it appear that your internet browsing activity is originating from somewhere else. This helps protect your identity.

Using a VPN can prevent you from getting hacked while on public WiFi.

VPNs are commonly used to access online content that is restricted or censored. For example, a VPN can be used to connect to Snapchat from schools where it is blocked. Another common use for VPNs is to watch sports that blocked in certain cities or countries.

NordVPN lets users choose from more than 5500 servers in 59 countries including Canada. There are 416 servers in Canada at three locations – Montreal, Vancouver, and Toronto. You can select your location if you wish to change your IP address to Canada. Specialty servers for P2P, Obfuscated, or a Double VPN connection are available making NordVPN one of the best VPNs for watching Canadian television and cable programming online.

Choosing a Canadian server will ensure you can change your IP address to watch Canadian programming from outside the country. NordVPN has a 30-day money back guarantee, so you can watch for free for a month, then cancel the service. Prices are as low as $3.50 USD monthly.

NordVPN works on Windows, macOS, and Linux computers. It also has apps for iOS, Android, and Android TV and proxy extensions for Chrome and Firefox web browsers.
Users can up to six devices simultaneously.

IPVanish offers over 40,000 shared IP addresses from more than 1,300 servers in 75 locations. Although IPVanish does not have as many servers worldwide as NordVPN does, it has more servers located in the same cities. IPVanish has sthree proxy servers in Montreal, twenty proxy servers in Toronto, and seven servers in Vancouver.
IPVanish comes with seven-day money-back guarantee so you can use it for free if you cancel right away.

We’ve tried other Canadian VPN services such as TunnelBear and VPNhub and both are free and easy to use. They both work on most Windows, iPhones, and Android phones. Better yet, TunnelBear and VPNhub are both Canadian companies. However, since both VPNs are free, they come with more limitations. You cannot choose your country or your server. VPNhub is only free for mobile devices. You’ll have to upgrade for laptops and desktop computers. Although you may get lucky with a Canadian IP address using these two, it’s not guaranteed.