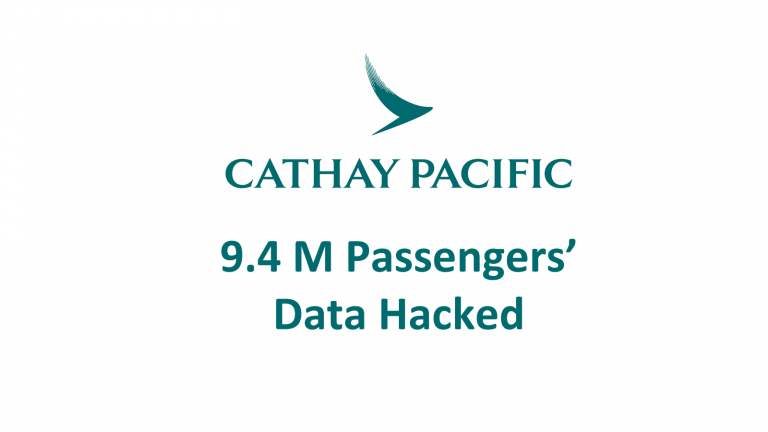 Cathay Pacific Airways announced a massive data hack with a press release today. Hackers stole the personal data of an estimated 9.4 million passengers. The data breach was first discovered by the airline in March 2018 but not disclosed until now, five months later.

It is common in cyber security forensic investigations for the number of affected customers and the scope of the hack data to increase as more information is discovered.

The airline’s website lists the data hack as a “data security event” and provides a link for the public to learn more information about the cyber security incident. The announcement confirmed that officials were working with an outside security firm to investigate what transpired. The cyber security investigation company was not named.

How Do I Know If I’m Affected by the Cathay Pacific Data Hack?

Cathay Pacific officials discovered suspicious behavior on their IT system in March 2018. That suspicion was confirmed in May. Since that time, they have been working to identify exactly which customers were affected by the hackers. The airline’s press release stated that Cathay Pacific would take “immediate action to investigate and contain the event.” Disclosing it to the public in a timely fashion does not appear to have been part of that plan.

Customer service representatives are contacting affected customers. A dedicated website and call center were setup so passengers can contact the airline to see if their data was stolen. Customers affected by the hack including members of the Marco Polo Club, Asia Miles, and registered user will be contacted individually. Customer service related emails will originate from an official email address [email protected] Customers should remain vigilant for phishing emails as these are common from additional hackers looking to take advantage of an already situation.

If you have any further questions about the Cathay Pacific Data Hack, more information is available on a dedicated website infosecurity.cathaypacific.com Passengers can call 1-888-229-5139.

Who is Cathay Pacific Airways?

Cathay Pacific Airways Limited is the flag carrier of Hong Kong which. The airline was founded in 1946 with its main hub being at Hong Kong International Airport.

Cathay Pacific Airlines Data Hack – What Do I Do Next?

Cathay Pacific is providing free ID monitoring services to passengers affected the data hack. Experian will provide its credit monitoring service, known as IdentityWorks Global Internet Surveillance to monitor the personal data of those who take advantage of the service.