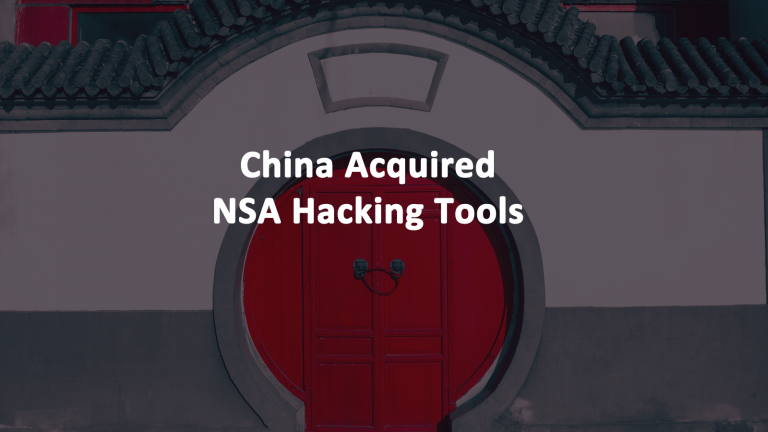 Symantec released a post that concludes Chinese hackers acquired and used US government developed hacking tools earlier than previously thought. Cyber security experts have tracked China’s hackers for over ten years and regard them as one of the most skilled and menacing hacking groups. They’ve hacked defense targets within the United States including space, satellite, and nuclear propulsion technology makers but never the US government itself.

It was previously thought that the Chinese picked up US National Security Agency (NSA) hacking tools, in a code dump courtesy of hacking group APT23. But according to the analysis, the Chinese hackers were using variations of two NSA hacking tools, known as Eternal Synergy and Double Pulsar before APT23 released the code. It is suspected that the Chinese may have acquired them from a US sponsored cyber attack.

Who is the Buckeye Hacking Group?

In the report, Symantec refers to a Chinese Ministry of State Security contractor operating out of Guangzhou, China as the Buckeye hacking group. They are also known as APT3 and Gothic Panda. The Buckeye group has been active since about 2009.

China’s Buckeye group disappeared after the US Justice Department (DOJ) indicted three of its hackers in 2017. Hacked US corporations named as victims in the DOJ indictment were Trimble, Siemens, and Moody’s Analytics.

Who is Equation Hacking Group?

Shadow Brokers are a hacking group who are best known for stealing highly coveted NSA developed hacking tools. Shadow Brokers released samples of the apps and offered them for sale on the dark web. Finally, all of the tools were released on darknet marketplaces. Variants of the NSA code used by China appear to be different from those released by Shadow Brokers. The most well-known hacking tool is the NSA’s EternalBlue which was used in the infamous WannaCry ransomware cyber attack. The ransomware, Wanna Decrypt0r, also known as ‘WannaCryptor’ or ‘WCRY’ is a variant of malware WannaCry.

China’s Buckeye hacking group used NSA tools to gain access to victim organizations for at least a year before Shadow Brokers made the code available online.

Malware is any unwanted software found on a computer system, hardware, router, or any part of a computer network. Malware can be used to take over and hold files or an entire computer hostage in exchange for money. This is known as a ransomware attack.

Hackers, including state-sponsored hacking agencies, use malware and other hacking tools to steal data and spy on the activities of private corporations and governments. Malware can be delivered by any number of attack vectors. Phishing campaigns are a frequent method used to gain access to a computer. Once infected, hardware can spread malware to other machines on the network.

Because the NSA was hacked themselves, they were forced to turn over their collection of hacking software and known vulnerabilities to Microsoft for help with patching systems. As a result, some NSA covert operations were shut down.