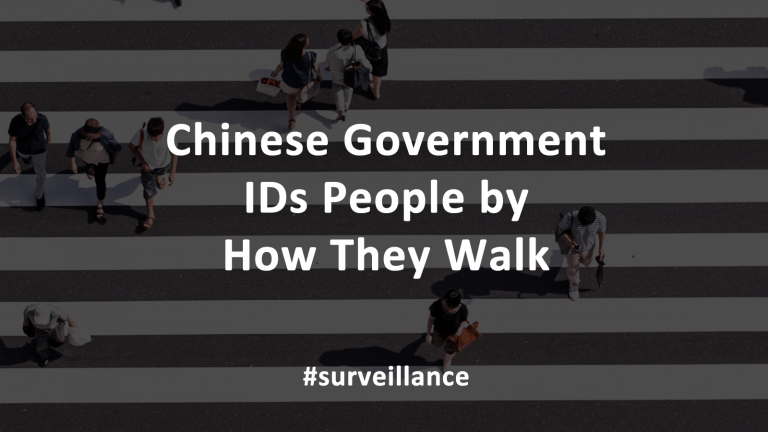 Chinese police are using a new technology to surveil citizens in Beijing and Shanghai. The artificial intelligence system is the work of a Chinese startup called Watrix, states an Associated Press article. The AI technology can identify people on the street at a distance of up to 50 meters. The disturbing news is that It can identify a person analyzing on their gait. No facial features are needed to make a match. Watrix’s system is not dependent on facial recognition and it even works with the person’s back is turned away from the sensors.

Huang Yongzhen, the CEO of Watrix, said that his company’s “Gait analysis can’t be fooled by simply limping, walking with splayed feet or hunching over, because we’re analyzing all the features of an entire body.” He reports that his gait recognition system is 94% accurate.

Watrix’s gait recognition AI works by analyzing a person’s silhouette with imagery taken from video footage. Watrix’s gait analysis then models the person’s gait and analyzes it. The system cannot currently be used to identify a person in real time because the computing and modeling is still too slow. It can use footage from surveillance cameras to identify people by their gait.

Chinese police already use cameras and facial recognition technology to surveil crowds of people and identify offenders. The Chinese government is reportedly developing a network of surveillance cameras for the entire country. The Watrix system does not require special cameras to work.

Many smartphones use biometrics to control access. Huawei, Samsung, LG, and iPhone all sell phones with fingerprint and facial recognition technology to unlock devices or access apps.

Social media sites like Facebook use facial recognition to identify people in photos and videos. The ability to “tag” friends in images makes It easier to share memories with friends and family. It also helps Facebook grow its userbase, However, it is a major intrusion on privacy. Facebook algorithms can automatically identify people in images and prompt users to confirm the person’s name.

What Is Biometric Surveillance Used For?

Facial recognition was developed in the mid-1960s for the intelligence community. Biometric surveillance is primarily used for security purposes. Private businesses use Biometric Artificial Intelligence technology to control access to buildings, IT systems, and sensitive information.

There are other positive aspects to facial and gait recognition software. Biometrics monitoring can be used for more than just monitoring and controlling citizens. It could be used to identify dangerous situations or medical emergencies.