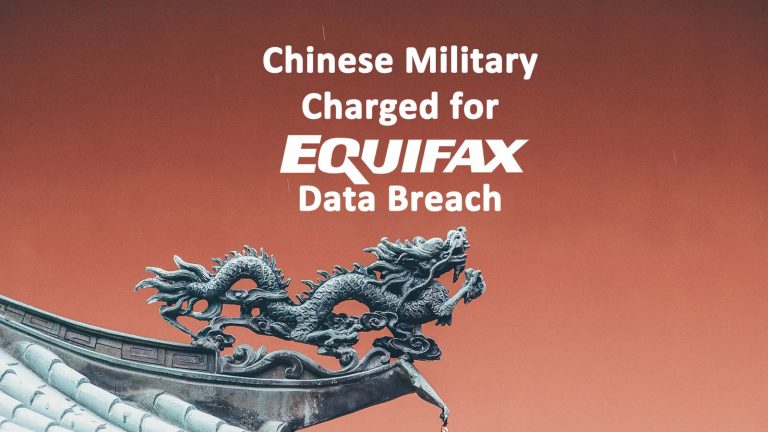 According to the nine-count indictment from the DOJ, the defendants exploited Equifax’s Apache Struts Web Framework to gain access to the company’s computer system. The indictment also stated that, “In total, the attackers ran approximately 9,000 queries on Equifax’s system, obtaining names, birth dates, and social security numbers for nearly half of all American citizens.”

China has denied any involvement in the Equifax hack.

The hackers downloaded the names, dates of birth, and Social Security numbers for nearly half of United States citizens from of May 2017 to July 2017. They routed their traffic through some 34 servers in 20 different countries. Routing traffic through servers and in a multitude of countries helps avoid detection by modern security algorithms and hardware. Log files were erased nightly so as not to expose the large volumes of data being transferred off Equifax servers.

Although it is disturbing that state-sponsored hackers from China, or any hackers at all, have stolen the data of millions of people, many feel that is better than alternatives. PLA’s 54th Research Institute is generally not in the hacking business to make money from stolen payment information or identity theft. The hacking group’s main focus is espionage and corporate secrets.

Recently WaWa convenience stores suffered a massive breach of their point of sale terminals at all 825 locations including their fuel pumps. The data breach also carried on over a period of many months – from 04 March 2019 to 12 December 2019. Just last month the first group of 30 million payment cards turned up for sale on dark web marketplace Joker’s Stash. Hackers buy card numbers or physical cloned cards to use them for purchases or to sell to other buyers. Any payment card used at WaWa last year should be replaced with a new card and new set of numbers. All bank and credit accounts should be monitored for suspicious activity.

Richard Smith, Chairman and CEO of Equifax stated, “This is clearly a disappointing event for our company and one that strikes at the heart of who we are and what we do.” He then apologized.

Regardless of weather or not the PLA or any other hackers breached Equifax’s IT system, the company itself shares responsibility for not securing their servers, network and highly personal data with best cyber security best practices. According the court documents from a class action lawsuit filed by shareholders, Equifax IT staff used the incredibly weak username admin and the password admin as credentials for a web portal used for credit disputes. Equifax also stored sensitive personal data on public-facing unencrypted servers.

In March 2018, Equifax filed a motion to dismiss the lawsuit, but ultimately settled with the FTC for $425 million in September 2019.

What is the PLA 54th Research Institute?

The People’s Liberation Army 54th Research Institute is ostensibly part of the General Staff Headquarters Department and is responsible for Signal and Electronic Intelligence (SIGINT and ELINT respectively) gathering. The 54th Research Institute is part of the Strategic Support Force whose task is to support PLA combat units through nontraditional means, such as hacking into enemy communications, stealing plans, and disrupting lines of communications.

This is not the first time the United States has accused PLA personnel of hacking into US companies. In 2014 another DOJ indictment accused 2014 five PLA officers of corporate espionage for hacking into private companies in Pennsylvania and Oregon – related to steel, solar, and nuclear power industries. In one instance, a nuclear power plant manufacturer negotiating to build power plants in China was hacked by the PLA. Stolen were corporate communications related to business strategy and vulnerabilities as well as design specifications.

What Happened in the Equifax Data Breach?

The Equifax data breach occurred over a period of months from mid-May 2017 until Equifax discovered the data breach on July 29. Hackers accessed Equifax servers and stole the sensitive information of millions of people. About 147.9 million Americans had their Social Security numbers stolen. Payment card information (credit cards and debit cards) for approximately 209,000 U.S. consumers were hacked. The data of 700,000 UK consumers as well as consumers in Canada was also hacked.

Former Equifax Manager, Sudhakar Reddy Bonthu plead guilty to insider trading and was convicted by The US DOJ. The former web portal manager was sentenced to eight months of house arrest and fined $50,000. Bonthu was ordered to forfeit $75,979 in profits gained as a result of the illegal trades.

Who Was Affected by the Equifax Data Breach?