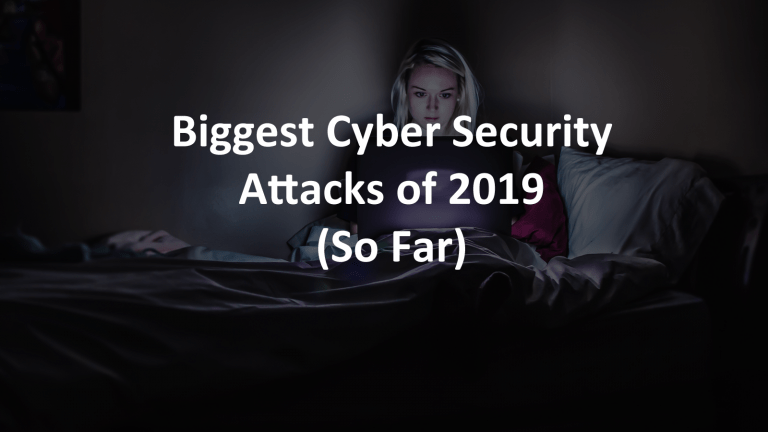 It is not unusual to read that a major corporation was hacked. Massive hacks of 2018 included Equifax and Yahoo. The attention-getting hacks involved credit card companies and money, but personal data is just as important. It is common that hacked personal data leads to stolen identity and financial losses with new accounts opened in victims’ names. Here are the top cyber attacks of 2019. This list will be updated as the year goes on.

Approximately 65,000 files and hundreds of gigabytes of motorist data were taken. Some of the hacked data was posted on the deep web. Hacked files included Microsoft Excel files named for locations and postal codes. Image files named for “driver” and “scene” were also among the hacked files. Some files are associated with government agencies like U.S. Immigration and Customs Enforcement. Other files are database files, HTML pages, and other image formats.

2019-05-08
https://www.askcybersecurity.com/baltimore-hacked-ransomware/
The city of Baltimore, Maryland was breached by a crippling ransomware attack. The cyber security attack stopped all customer service for city public works and other city offices. Residents could not pay utility bills or access city or county financial accounts. and financial transaction for many city of Baltimore departments. Residents were unable to pay their bills for city and county accounts. Late water bill fees were suspended due to the ransomware attack. Public Works email accounts and phone lines were not functional.

2019-04-01
https://www.askcybersecurity.com/toyota-hacked-3m-customers/
Toyota Motor Corporation was again the target of a cyber security attack in April 2019. Hackers accessed and stole the personal data of about 3.1 million Toyota Japan customers. Toyota announced the hack on March 29. Although sales data was taken from Toyota dealerships in Japan, US customers are not affected. Compromised data included customer names, addresses, dates of birth, government identification numbers, and employment data. Fortunately, credit card numbers were not part of the data breach.

April 16, 2019
https://www.askcybersecurity.com/instagram-phishing-attack-nasty-list/
In April 2019, Instagram users saw a new phishing attack known as the Nasty List Attack. This social media phishing scam informs readers they are on some fictitious nasty list and urges them to look at the listing. The social media scam sends messages that direct victims to a spoof website that steals login credentials. Other compromised accounts are used to send the scam through direct messages on Instagram. After an account is hacked, it sends the nasty list phishing scam to the followers of the hacked account.

Citrix hacked by Breached by Iridium

2019-03-11
https://www.askcybersecurity.com/citrix-hacked-iranian-iridium/
Citrix Systems Inc., the data center and business software provider, suffered a hack of their own internal network. An APT group, Iranian-backed Iridium, was responsible for the cyber security attack. Six to ten terabytes of corporate data were stolen from Citrix servers. Like a typical APT data attack, it is believed that Iridium gained access to Citrix’s IT system about ten years ago. The data was stolen during December 2018 and again on March 4, 2019. Citrix handles sensitive projects for White House communications, the U.S. military, the FBI, and private companies. Citrix was made aware of the cyber attack by the US Federal Bureau of Investigations (FBI).

2019-02-25
https://www.askcybersecurity.com/hackers-exploit-linkedin-deliver-malware/
A LinkedIn malware sent fake job offers through LinkedIn direct messages and emails. Multiple contacts built trust with recipients while gathering increasingly personal data, like email and birthdate. After the necessary information was collected about a victim, spear phishing attacks were used to send more messages and emails along with malicious attachments. A spoof website hosted malware with file downloader capabilities which compromised the readers’ device.

2019-01-02
https://www.askcybersecurity.com/hackers-attack-tribune-newspapers/
Ryuk ransomware infected the Tribune Newspapers publishing network. Paralyzed by the cyber attack, Tribune was unable to produce, print or distribute newspapers. The Saturday editions of the Los Angeles Times and San Diego Union-Tribune were halted. The west coast printing editions of the Wall Street Journal and New York Times were also disrupted. The goal of Ryuk ransomware attack was to disrupt the production of the papers by shutting down servers critical rather than to steal information or money.

https://www.askcybersecurity.com/fortnite-accounts-hacked/
2019-01-16
Video game Fortnite was once again compromised. This time hackers were able to take over the accounts of any player, access their personal account information, buy V-bucks Fortnite’s in-game currency, and listen in on conversations. Fortnite has 200 million users globally.