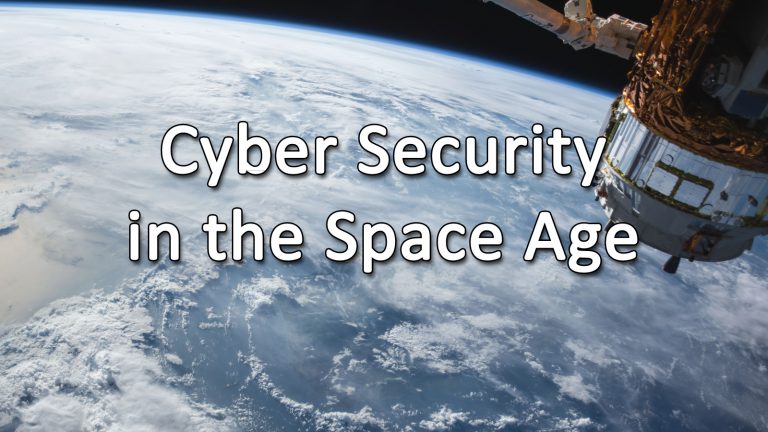 Cyber security is becoming more relevant with each new data breach, malware attack, or day one exploit that appears on the daily news cycle. Everyday there are millions of attacks against servers, businesses and people all over the world. Cyber warfare is an area where countries are still learning, and businesses are struggling to catch up. It can be a struggle to implement the ideal cyber security measures down here, on Earth, where the equipment is readily accessible and tech support can come out to help you. But what about a few hundred miles up, in space? In space, no one can hear you scream…for tech support to please un-brick your satellite. As cyber warfare continues to expand in scope, space will become an active cyber war-zone.

The Internet of Things (IoT) has continued to spread along the planet and is beginning to reach into space, which represents an opening in the security of space based devices. The IoT is only as secure as the least secure device due to the interconnectedness required to make the IoT actually work practically. IoT devices seamlessly share data with each other, and they don’t ask for new permissions each time they do so. Instead IoT devices require an initial permission, which they then maintain. Permissions might need to be refreshed every so often, but a window for an intrepid hacker to step in and take over a satellite.

When it comes to space based equipment, software is the only practical fix. If a hard drive gets encrypted in space, no one is going to fly up there and replace it with a new one. If your programmers can’t figure out how to restore your satellite from the ground, you’re at the mercy of your attackers. With the price of space travel, ransoms could get ludicrously high. Getting into space is costly, and any company that has infrastructure is going to pay-out-the-nose to get it back.

Space platforms make the world work, satellites are a critical part of the global infrastructure. Imagine if hackers managed to knock out or take control of several GPS satellites. Worse, if malware causes a satellite to malfunction it may destroy the satellite. Part of the problem is that space isn’t seen as an area that’s in danger, it’s space after all. How would you even hack a satellite? Beefing up space borne cyber security has been passed up in favor of focusing on terrestrial threats, where the real dangers are. Unfortunately, this focus on earthbound cyber security has left space vulnerable to attack and it may take the first space-hacking to draw attention to this issue.