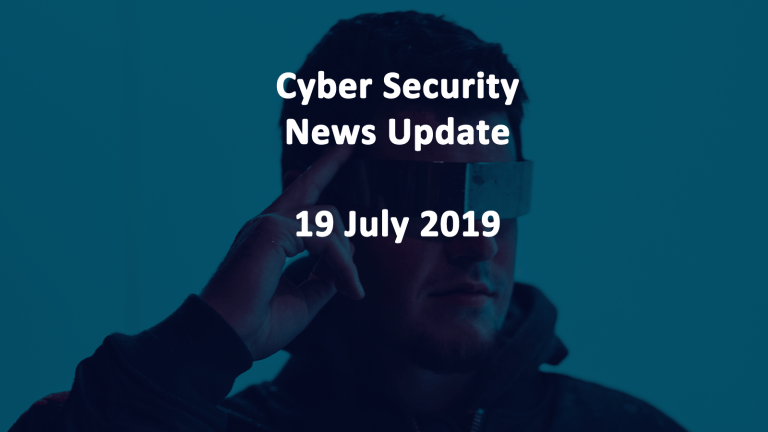 So far over over 22 million people and seven companies are victims when AMCA servers were compromised through their website payment portal last month. Lab diagnostic companies Quest Diagnostics, LabCorp, and BioReference Laboratories all used AMCA to collect payment on their patients’ past due and were the first to report the data breach.

Canada’s Cyber Centre reports a new malware cyber attack is affecting Microsoft Windows users. Astaroth malware, is a fileless malware that steals data from victims devices like login credentials and keystrokes. Astaroth is especially dangerous as the malware is fileless, meaning it does not download a payload of malicious files. Instead, the malware resides in the infected machine’s memory making it much more difficult to detect.

Fileless malware was first observed in the early 2000s. Astaroth malware takes advantage of default applications to mask its malicious activity. The initial cyber attack vectors include phishing emails along with a spoof website used to trick victims into clicking on links to malicious files that launch the malware attack.

US soldiers will soon be able to identify people including enemies, suspects, and any other persons of interest through the use of a modified gamer headset and goggles. The project is being developed by Microsoft for the US Military, and is known as Integrated Visual Augmentation System, or IVAS. The headsets will give soldiers views from drone cameras as well as facial recognition technology for crowds and the ability to translate foreign language road signs in real time. Drone vision will help a soldier aim and shoot without having to expose their position. The headsets and goggles will also enable soldiers to train in virtual reality environments.

“We’re going to demonstrate very, very soon, the ability, on body — if there are persons of interest that you want to look for and you’re walking around, it will identify those very quickly,” said Col. Chris Schneider, project manager for IVAS. The technology is not expected to deploy for about five years.

A Hewlett Packard (HP) survey found that 79 percent of consumers are concerned about their webcams and privacy. Women were found to be more troubled about privacy issues. Sixty-seven percent of female respondents reported that they worry that their privacy can be compromised by a webcam while compared with 59% of male respondents. The HP poll of 3,000 US consumers also found that the majority of respondents take measures to disable webcams and protect themselves. Seventy-five percent of those surveyed sabotage the camera. They either shut off the webcam, close the lid of a laptop, and 60 percent physically cover the webcam lens with something like tape or an adhesive bandage. While 83 percent of Baby Boomers reported that they are aware that hackers could compromise privacy through a webcam, only 49% had disabled them.