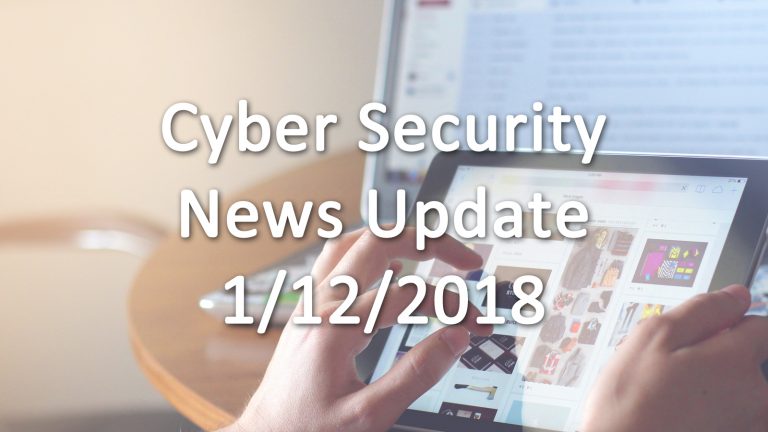 Monero is in the news again this week, as a new piece of malware infects devices to mine for it. Monero is a cryptocurrency that sells itself as being completely untraceable, which makes it the perfect accessory to criminal activity. The new program, called Zealot, installs itself into Windows or Linux based machines and turns them into miners. Zealot uses tools from the EternalBlue leak, which means this malware is yet another in a growing list of offspring. Companies are pushing out security patches, so make sure to keep your devices updated. Zealot can be particularly dangerous if it gets into a server, from there it can spread into the rest of the network.
Source: Zealot Loads Cryptocurrency Miner on Linux, Windows Machines

The patches for Spectre and Meltdown have been going out, and customers are less than happy how they’re affecting their devices. Users are reporting massive slowdowns to their devices, which is due to the nature of the patch. Sepctre and Meltdown both capitalize on the process that makes modern processors so fast: the kernel that resides in them. The kernel lets every action run, it provides the base code necessary to get anything done. Modern processors keep the kernel stored on themselves, hidden, but ready to go at any moment. This speeds up their processing time by not forcing them to retrieve the kernel from where it’s really stored every time something needs to be done. On a modern device, millions of things are done every second, and even the tiniest delay in kernel retrieval time is amplified. The patch force the kernel to be called up each time it’s to be used, rather than let it be stored somewhere it would be vulnerable. While this patch keeps computers safe from Spectre and Meltdown, which are serious pieces of malware, it’s causing huge slowdowns. The slowdowns are hitting older devices the hardest, many of which are now struggling to even boot up. Part of the issue is that the vulnerability was apparently discovered in 2016, and consumers weren’t told of it until it was found again. Intel has promised to be more transparent in the future, and they’re still claiming that the vulnerability isn’t a design flaw.
Source: Intel, Microsoft, Google Scramble for Solutions as Patches Slow Systems

Surprisingly, Apple devices are in the news for being under attack. OSX, or MaMi, is a program that specifically targets devices running Apple’s macOS. MaMi changes the DNS server of the infected devices, a tactic that is common in viruses that infect routers. From there MaMi uses the altered DNS to change the certificates the infected device uses. This allows MaMi to intercept the devices traffic, and even get around encryption schemes by altering what’s being used. MaMi is capable of cursor movement, downloads/uploads, executing commands and screen captures. It’s believed to be spread via phishing emails, ads and other traditional tools. So, if you’re using a mac don’t open the email from someone you don’t know. Don’t go clicking every ad in sight, even if it tells you that you’ve won a free iPad. To see if your device has been infected, you can check your DNS server settings. If it’s either 82.163.143.135 or 82.163.142.137 then your device has been infected. Currently, antivirus software isn’t detecting MaMi. There’s no way to remove it, outside of a third party tool, which we advise against. Instead, reset your DNS to where it should be and use a firewall to block off the traffic from MaMi.
Source: Warning: New Undetectable DNS Hijacking Malware Targeting Apple macOS Users