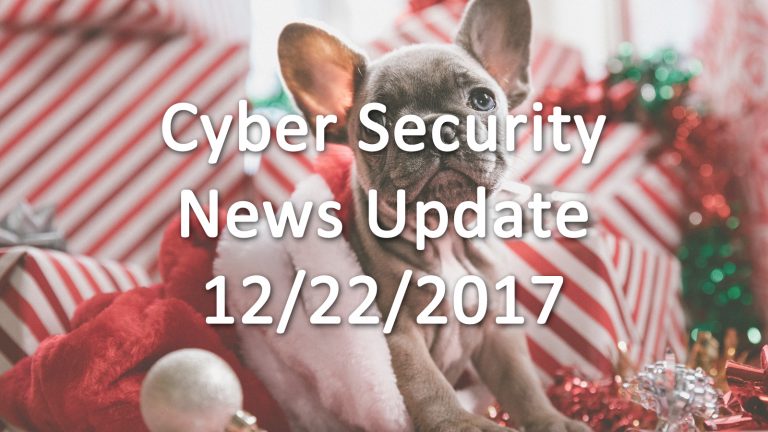 Merry almost-Christmas, the holidays have not been kind to Bitcoin or Kaspersky.

The biggest story of the day is that Bitcoin shed nearly nearly 40% of it’s value over the course of the day, and while it has started to rally it’s still down several thousand dollars. This rapid loss in value seems to have been spurred on my by several factors; “Whales” or people who’ve been hoarding bitcoin, have sold off huge portions of their holdings in response to an expected price drop; the founder of Litecoin sold off all his Litecoins in response to an accusation of a conflict of interest. Before today Bitcoin was trading for roughly $20,000 USD and its value is now near $12,000 USD and climbing. Bitcoin cash had its trading suspended on Coinbase over an accusation of insider trading. Overall cryptocurrencies are down in value today, though overall it’s been a great year for them. Altcoins, or alternate cryptocurrencies, are showing massive increases in their value so if you want to get into trading them you can check out our articles on them.
Source: Bitcoin lost a third of its value in 24 hours

How to Set Up Coinbase

Need a Bitcoin Wallet? Read This!

How to Set Up Your Cryptocurrency Exchange and Wallet

Kaspersky Labs is once again in the news, this time for a lawsuit of their own rather then being the target of one. Kaspersky is currently suing the Trump Administration in a US Federal Court over the ban of Kaspersky products. Their legal claim stems from the position that by denying them the right to be used by US government agencies, that the Trump Administration violated their right to due process. They argue that because there was no court case, or chance to challenge the ruling, that they’ve been denied the chance to defend themselves. The challenge is being substantiated from the Administrative Procedures Act, which requires “substantive evidence” for a policy to remove a certain vendors product. Kaspersky was originally under fire for their software copying files from an NSA contractor’s laptop and seemingly being connected to a hacking attempt that recovered those files. In recent months it came out that the NSA contractor in question already had those files, illegally, on his laptop and his devices was infected before Kaspersky software was present on it. Seeing as this case was the driving force behind the removal of all other Kaspersky products, it’s a fairly good claim on the company’s part. Kaspersky has lost business over the whole affair, and not just from the US government. Retail stores in the US took Kaspersky products off their shelves in response to the governments ruling, seeking to avoid any potential repercussions for having software from them. Kaspersky may be able to successfully sue for damages to their business and reputation, but the US government would have to allow that to happen first. The United States Government, like every other one, has the right to disallow court cases against itself. This acts as a protective measure against wasteful lawsuits, or to shield itself from the repercussions of its actions. It does have legitimate use, but it has been used in the past as away to get around damaging lawsuits, much like the Kaspersky one. Only time will tell if the government will exerciseRussia-Based Kaspersky Lab Sues Trump Administration For Banning Its Software this option.
Source: