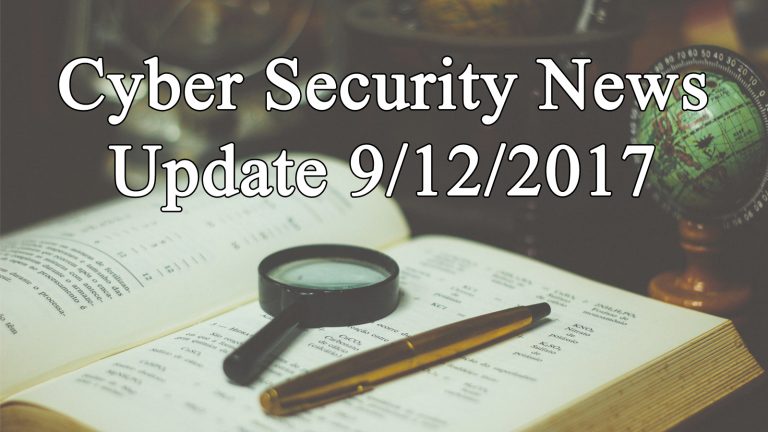 We’ll be tackling everything from cyber security for law firms to killer sexbots in this Cyber Security News Update!

Equifax has been in the news a lot lately, and for good reason. Their data breach is a catastrophic problem, potentially exposing the social security numbers of 143 million customers. Lawmakers from both parties want Equifax to testify, and their may be a slew of retaliatory laws and regulations applied to the market in response. A possibility is that the government will require agencies that handle secure personal data that originates at the federal level to maintain the same standards federal agencies will have too. They may set up a system of automatic fines, penalties or restitution that kick in whenever a breach occurs. Whatever they do, hopefully it will be effective. While data breaches don’t occur often, when they do they’re usually catastrophic in nature. Companies should not be praised for keeping their clients data safe, that’s part of doing business. They should be praised when they’re system resists an attack, or they suffer a breach and their encryption keeps the data from being usable.
Source: Equifax Scrutiny Intensifies

Law firms are full of data that hackers want. Personal records, financial information, evidence files, a complete history of their defendant, medical records, the list is endless. If a personal piece of information exists, it has been in a law firm at some point. This constant influx of data makes them a prime target to enterprising hackers looking for that big score. A webinar by LogikCull showed that only 50% of law firms have some kind of cyber security group on the payroll. So half of all US law firms have someone on call, ready to go if an attack occurs. Data breaches are not the sort of event that you want to wait six hours while you call up anyone with IT experience to see if they can fix what’s going on. What’s worse, without regular monitoring for data breaches, a law firm may have no idea that they’ve been comprised by hackers. Law firms lack basic cyber security practices that every business should practice, not just ones with personal information. 2-Step Verification, meaning if you want to login your phone has to receive a code for you to input. Encrypting everything, regardless if it’s important or not. Remember, if you only encrypt important documents then anything you encrypt is important. Controlling that sort of secondary information is key to an effective cyber security defense.
Source: What You Need To Know About Law Firm Cybersecurity

Programmed sex robots have been in the news during slow periods for the last few years. They cost thousands of dollars, and are driven by advanced computers. Those computers house AI’s that attempt to learn what their owners prefer, and they can receive software updates wirelessly. That means they can be hacked into, without the hacker being anywhere near the robot in question. These robots have servos in them, as well as articulated joints and skeletons. Imagine, if you will, the nightmare scenario of being naked and chased by a life-sized naked barbie doll with the strength to crush your bones with one hand. Admittedly, the robots on the market can’t walk anywhere so you won’t be chased but that won’t matter since you’ll be so intimately close to them.
Source: Hackers could train sex robots to kill, cyber security expert warns