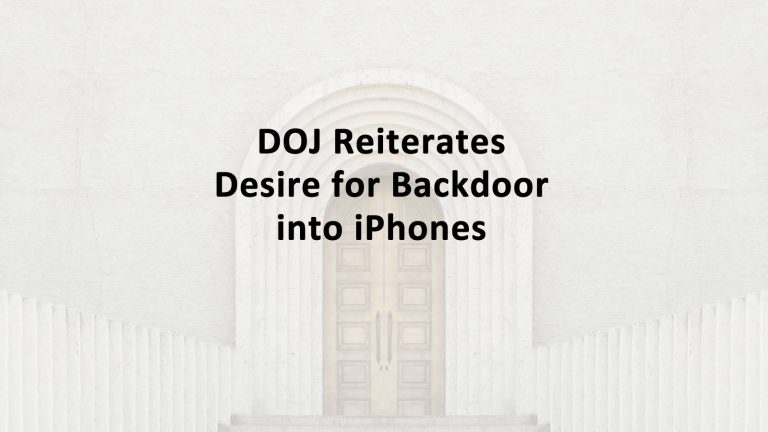 Attorney General William P. Barr and Federal Bureau of Investigations (FBI) Director Christopher Wray in a press conference today reiterated their want of a backdoor into Apple devices. In an announcement about the success of recent investigation, Barr made a point of talking of wasted time and money spent hacking into an encrypted iPhone.

“I must also express my great disappointment that it took over four months and large sums of taxpayer dollars to obtain evidence that should be easily and quickly accessible with a court order,” Barr said
Apple has cooperated with the Depart of Justice (DOJ). However, the company refuses to yield to a DOJ request for special backdoor access to iPhones and other Apple devices. The company continues to push back saying any backdoor would leave the device vulnerable to hackers. In addition, Apple does not store user passwords, so it has no ability to provide login credentials to the DOJ.

What is a Backdoor?

A backdoor when speaking of computers, software, phones, and other electronic devices is a method of undermining security features. Backdoors may include computer code or hardware.
“There is no such thing as a backdoor just for the good guys, and the American people do not have to choose between weakening encryption and effective investigations,” Apple says.

The criticism from the DOJ came with an announcement that the FBI has successfully defeated iPhone encryption in the case of the 2019 Naval Air Station Pensacola in Pensacola, Florida. A Saudi national, Saudi Royal Air Force Mohammed Saeed Alshamrani Lieutenant, killed three soldiers.
“Apple made a business and marketing decision to design its phones in such a way that only the user can unlock the contents no matter the circumstances” Wray said.

READ: Would You Let the Government Track Your Every Move?

The FBI successfully hacked into the two phones belonging to Alshamrani without the help of Apple. Barr says that the iPhone contained evidence that connects the shooter with Al Qaeda in the Arabian Peninsula. The evidence contained on the phone also led to the arrest of another terrorist in Yemen.
The fact they were able to break into the phone themselves raised question why they constantly complain about needing a backdoor.

Apple is not the only tech company that Barr has criticized for its encryption. Facebook owned WhatsApp offers end-to-end encrypted messaging. The DOJ has also requested a backdoor to that as well. But Facebook refuses to cooperate. Barr says that WhatsApp as “irresponsible encryption” and is a danger to the public.

Both Apple and Google continue to push back against government agencies and privacy concerns. The most recent issue is over the introduction of contact tracing apps used to track the spread of the coronavirus. Neither phone developer is willing to governments unlimited ability to surveil citizens. There are other concerns about where data is stored and for how long. Just like a backdoor, a treasure trove of personal data stored in one location is a target for hackers.