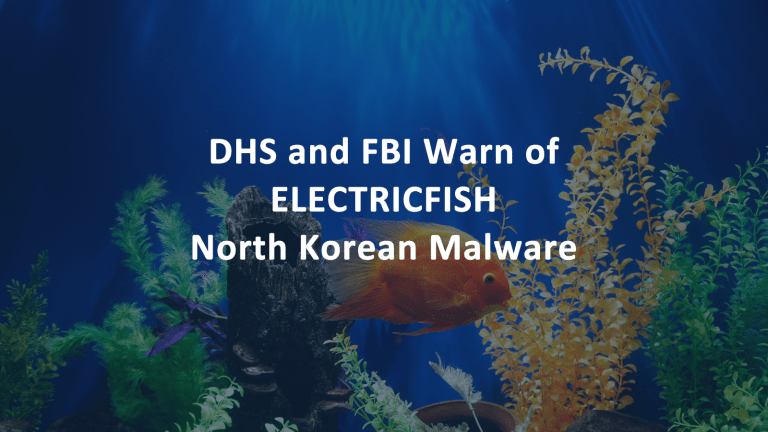 The U.S. Department of Homeland Security (DHS) and the U.S. Federal Bureau of Investigations (FBI) issued a warning through the US-CERT website about a new malware variant known as ELECTRICFISH. The malware is connected to the North Korean government and its hacking activity. ELECTRICFISH malware was reported via the Cybersecurity and Infrastructure Security Agency (CISA) which is a joint venture between DHS and the FBI.

The U.S. Government refers to malicious cyber activity by the North Korean government as the Hidden Cobra hacking group. Alternative names are given to state-sponsored cyber attacks and hacking activities by other governments and private companies that operate globally. Hidden Cobra, also known as APT38, Lazarus Group, and Guardians of Peace

Malware is any type of unwanted software, app, or file on a computer system. Malware can reside on computers, routers, servers, or USB flash drives. Types of malware include ransomware, email attachments, or pdf files that contain executable files, ransomware, viruses, or spyware. Adware that resides on a computer to track and serve website adverts is also considered a harmless but intrusive form of malware. Many are familiar with the infamous WannaCry malware that shut down Britain’s public healthcare system last year.

Malware can be delivered through many cyber attack vectors. Phishing and spear phishing emails are one common example. But skilled hackers inject malware into IT systems by obtaining login credentials and delivering the malware with other hacking apps. The U.S. National Security Agency developed EternalBlue, an exploit that still serves as a foundation hacking tool for several malware variants, including WannaCry malware.

North Korea’s hacking group is one of the Advanced Persistent Threat Groups, or APT. Government associated hacking, whether contractors or direct efforts, generally goes by pseudonyms. In the case of North Korea, it’s Lazarus Group, and Guardians of Peace hacking.

APT38 typically hacks to steal money from financial institutions. The hacking group has infiltrated the IT networks of over 16 organizations in at least 11 countries. APT38 is associated with the 2017 WannaCry ransomware cyber attack, the 2014 Sony Pictures hack, and the 2016 SWIFT Banking cyber attack.

How Do I Protect My Computer Against ELECTRICFISH?

Device owners and system administrators should follow best practices to increase security on their devices and networks. Individuals should install malware protection on their devices and keep them up to date with the latest libraries. Individuals and system administrators should keep all devices patched and up to date. Exploiting vulnerabilities in unpatched computers allowed WannaCry to spread across Europe.