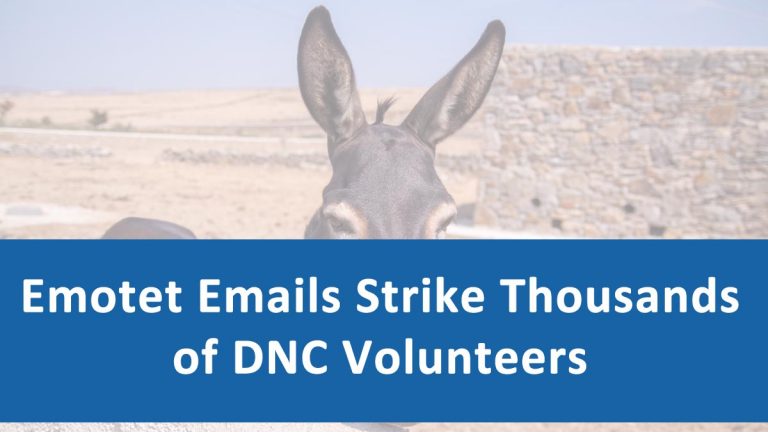 Hundreds of organizations and thousands of volunteers in the United States were spammed with malicious emails attempting to spread a new round of Emotet malware. The malware attack impersonates the Democratic National Convention (DNS) Team Blue initiative. Each spam email contains a malicious Microsoft Word document. If the recipient opens the attachment and has macros enabled, malware infects their computer.

Emotet malware attacks are notorious for the high recovery costs associated with their damage. Some of these attacks have cost organizations up to $1 million USD to remediate.

Emotet malware is one of the most costly and destructive malwares currently attacking state, local, tribal, and territorial governments as well as businesses in the private and public sectors

The body of the email prompts the recipient to open the attachment. If the recipient has macros enabled on their computer, the malicious word doc will infect their machine with Emotet malware.

Emotet malware is a banking Trojan. It spreads primarily via malicious email attachments and was originally used to commit banking fraud. The attackers have expanded to spamming, stealing login credentials, and email harvesting as well as downloading other malware.

In June, the US Federal Bureau of Investigation (FBI) issued a public service announcement warning to consumers to be vigilant with the use of mobile banking apps. Cyber criminals are increasingly using imposter banking apps containing Emotet malware to steal bank login credentials.

The attackers behind Emotet malware, TA542, do not typically go after political targets. The spam emails used to spread the malware contain malicious Microsoft Word email attachments or links to Word documents. Emotet is was first used to infect devices with banking malware. It  has also been used as a trojan to download Qbot, The Trick, IcedID, and Gootkit malwares.

How to Help Stop Malware from Infecting Your Computer