AskCyber Home » News » Mobile Cyber Security » What Does Encrypted Mean On My Phone? 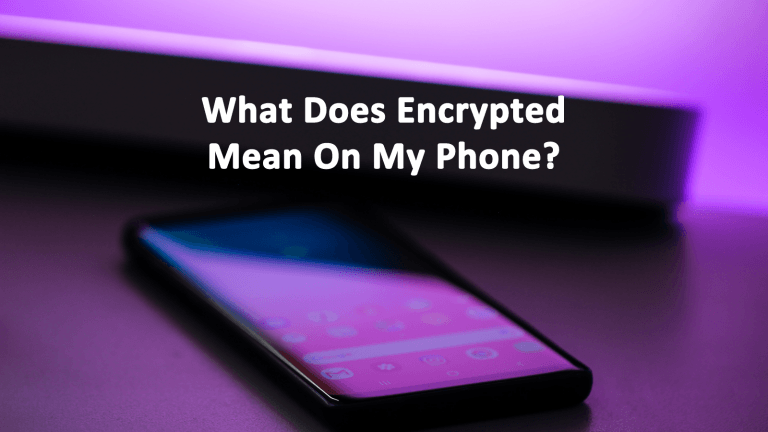 Encrypted On Your Phone – Files, Data, Messages, and Cloud Backups Should all Be Encrypted for Data Privacy

Encrypted on your phone means that photos, files, text messages, data, and email are all stored in cryptographic encoded format to hide information from unauthorized users. Encrypted phones cannot be unlocked nor can the data be read without the key, code or biometric login used on the encrypted phone and its data.

Encrypted data looks meaningless and Encrypted phones are extremely difficult to read or entirely unreadable by computers without a key that decrypt the data unless there is a way in by design or via a backdoor.

Encrypting a phone ads security in case it is lost or someone tries to snoop your data.

Encrypted phones mean protection where data privacy is important. People who are in areas where censorship is enforced, live under mass surveillance, and at border crossings should protect their privacy with phone encryption.

End-to-end encryption (E2EE) is a protocol where data and messages can only be read by the sender and the receiver. Many messaging apps like WeChat and Signal are popular because of their E2EE encryption. The goal is to stop hackers from intercepting sensitive data. In some countries, messaging apps can be used to send money or make payments.

What Does Encrypted Mean on iPhone?

Encrypted on iPhone means that your personal data is encoded so it is not human readable and not easy decrypted by computers. Apple iPhones are encrypted when their screens are locked with either a passcode, Touch ID, or Face ID depending on the iOS version. Touch ID is the least reliable method of securing your iPhone or Apple device.

iPhone encryption must be enabled to protect the device and its data. The menu option to activate this feature is in a different place, depending on the iOS version.

What Does Encrypted Mean on Android?

Android devices create a Trusted Execution Environment to secure their information. A decryption key is then required to encrypt and decrypt files. No one can make sense of a phone’s encrypted data without knowing the password or decryption keys.

Whether or not an Android phone is encrypted by default depends on the model and the operating system version. Most newer devices come with encryption enabled by default

How to Encrypt Your Android Phone

On some phones you may have to choose a folder called Personal then go to Security. On others you have to go to the More tab before finding the Security settings.

Since Android phones can have SD storage cards, these must be removed or encrypted separately. This feature is found under the security section. Encrypting Android data can also involve using Private mode which requires a passcode for select apps including the photo gallery and files

Encrypted messaging apps include Signal, WhatsApp, Messenger, and WeChat. Even if the messages are encrypted, data is typically only encoded while they are in transit. If the receiver saves the message to their unencrypted phone or to unsecured cloud storage, then the end-to-end encryption is busted. Data can be misused by hackers or anyone with access to stored messages.

If you store backups on iCloud, iTunes, your cellular data provider, or other cloud storage make sure that service is encrypted as well. Include saved passwords, WiFi credentials, sensitive data, social media logins, and sensitive files.

Encypted Files on My Phone

Individual files can be secured with passwords and biometric authentication regardless of the phone or app type. For example, Adobe pdf documents can be password protected.

If you’ve ever looked at a website URL in a web browser and noticed that the URL begins with HTTPS, the letter S on the end stands for secure. HTTPS indicates the website is using a secure certificate to verify its identity and ownership and also to protect your data.

Information is sent to and from your phone, even when you are not actively using it. Your sensitive can be intercepted while it is in transit, anywhere in between its destination and the sending phone – whether it’s on the way to a website or returning to your phone. HTTPS guarantees that your information is received and kept secure by the website.

Messages and all information between your phone’s web browser and a website traverse many servers, long distances, and hops, meaning there are many opportunities for hackers to intercept your information and steal your credit card or password. The easiest opportunity is for the hacker to monitor the unencrypted WiFi connection you are using – like that found in coffee shops and hotels- and steal your data right after it leaves your phone.

You should never enter any personal information, passwords, and especially payment information into any website or app that is not using HTTPS.