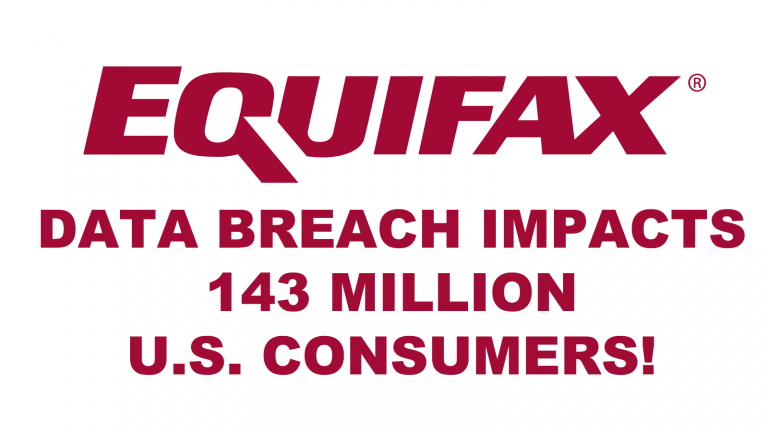 Atlanta based credit reporting agency, Equifax, reported that hackers accessed the records of over 143 million US customers. The data breach occurred from mid-May 2017 until Equifax discovered the cyber security breach on July 29. Hackers obtained Social Security numbers, birthdates, and addresses. In some instances, the hackers also obtained driver’s license numbers. In addition, 209,000 credit card numbers were also stolen. On top of that, certain dispute documents with personal identifying information for approximately 182,000 were also accessed by hackers. U.S. consumers were accessed. Customers from the United Kingdom and Canada were also affected.

According to their website, Equifax “organizes, assimilates and analyzes data on more than 820 million consumers and more than 91 million businesses worldwide.” The company operates in or has investments in 24 countries in North, Central, and South America plus Europe and the Asia Pacific region. Equifax is one of the three largest U.S. credit reporting firms.

Chief Executive Officer Richard Smith apologized and stated, “This is clearly a disappointing event for our company, and one that strikes at the heart of who we are and what we do.”

Three Equifax Managers sold their stock before the Cyber Hack was revealed to consumers! Before the company divulged the cyber security breach, three executives sold their Equifax stock, according to Securities and Exchange Commission. SEC filings show stock sales occurred on August 1 and August 2 and were worth about $1.8 million in total. The sales by the Chief Financial Officer, the President of U.S. Information Solutions, and the President of Workforce Solutions, were not pre-planned according the SEC paperwork. Equifax (EFX) discovered the data breach July 29 but did not announced the data breach until September 7, 2017. The company’s stock price, traded as EFX, sank 13% after the announcement.

The Equifax data breach is not the largest cyber security hack however. That largest data breach honor goes to Yahoo.com who admitted to a 2014 hack where at least 500 million customer accounts were compromised. Yahoo.com later admitted there had been an earlier data hack in 2013 that acquired users’ email addresses and encrypted account passwords and birthdates of almost one billion Yahoo.com users.

Consumers may find out if your personal information may have been impacted. Equifax set up a website https://www.equifaxsecurity2017.com/ for consumers to determine if they have been affected by the data breach. Everyone who wishes to do so is able to use their identity theft protection and credit file monitoring product, called TrustedID Premier, even is a consumer has not been affected by the data breach. The free identity theft protection, insurance, and credit monitoring protection is free of charge for one year after enrollment.