AskCyber Home » News » News » Equifax Data Breach What to Do 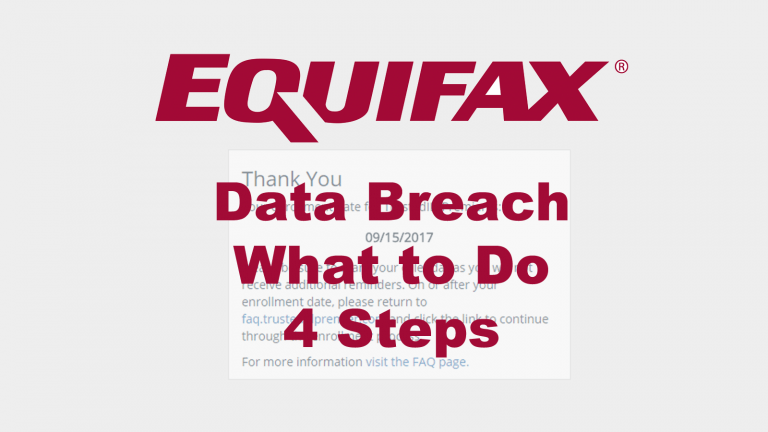 Equifax Data Breach What to Do – 4 Steps

Are you worried you may be affected by Equifax’s massive data breach? You should be, even if they told you were supposedly not an identity theft victim. Equifax announced the theft of personal information of about 143 million US citizens. The hack occurred between mid-May and June 29, 2017. Equifax made the announcement about the identity theft on September 7, well over a month after they became aware of the identity theft and data breach. In the interim, three executives sold almost $2 million dollars of stock during that timeframe. The New York State Attorney General Eric Schneiderman has opened an investigation into the Equifax identity theft.

Atlanta based Equifax is one of three major credit reporting companies in the United States. The other two are TransUnion and Experian. Equifax stated that the identity theft also affected consumers in Canada and the UK, although they declined to state how many were affected.

What can you do about the Equifax identity theft? Well, it happened, and it occurred over a month ago, so hackers have had plenty of time to time to dig into your personal information! Equifax itself graciously offers a free year of identity theft protection. You can supposedly check on your status – hacked or not hacked – by visiting a special website. Go to Equifax’s website, www.equifaxsecurity2017.com.

This TechCrunch post demonstrated that Equifax’s own identity theft checker was completely random. Even if the data status was accurate, would you trust them? Equifax had verbiage in its terms of service potentially restricts consumers’ legal rights if they opted into their free credit protection service, TrustedID Premier. The clause barred users from joining a class action lawsuit or other legal retribution. The New York Attorney General demanded the clause be removed and declared it as unenforceable anyhow. So now would you seriously trust the very people who couldn’t protect your information and then didn’t tell you about until a month later?

What Can I Do About Equifax Identity Theft?

Below are four steps you should take to monitor and protect your credit bank accounts, credit cards, and identity information!