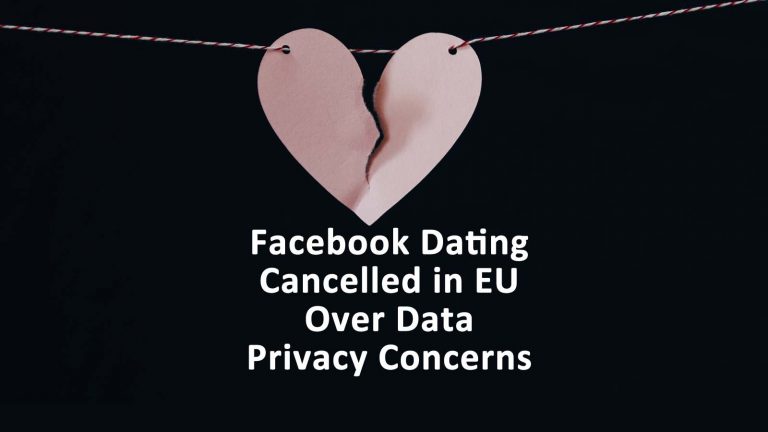 Facebook was forced to cancel the debut of its Facebook Dating service for European Union users due to data privacy concerns. According to a report in the Independent, Facebook failed to inform Ireland’s Data Protection Commission (DPC) about the launch with required data privacy documentation. According to the DPC, Facebook informed their office on February 3 that the dating service would begin ten days later on 13 February.

Helen Dixon is Ireland’s Data Protection Commissioner. Her office oversees Facebook’s operations for all of the European Union. The DPC office sent personnel to Facebook’s Dublin office on 10 February to collect privacy documentation that Facebook still had not provided. The DPC has inspection and document seizure powers in accordance with Section 130 of the country’s Data Protection Act.

According to the Independent, a spokesman for the Ireland’s DPC Commissioner said in regards to Facebook Dating, “We were very concerned that this was the first that we’d heard from Facebook Ireland about this new feature. Our concerns were further compounded by the fact that no information or documentation was provided to us on the third of February in relation to the Data Protection Impact Assessment (DPA) or the decision-making processes that were undertaken by Facebook Ireland.

Facebook launched its dating feature in the United States in September 2019. According to a statement made to TechCrunch, a Facebook spokesperson said, “We’re under no legal obligation to notify the DPC of product launches. However, as a courtesy to the Office of the Data Protection Commission, who is our lead regulator for data protection in Europe, we proactively informed them of this proposed launch two weeks in advance.”

This flies in the face of EU privacy regulations and data privacy assessment requirements. Facebook is currently the subject of several data inquiries from regulators in Ireland and Germany. The company is also being sued by the United States for over its declaration of assets.

Facebook has been the center of a lot of data privacy controversy. How much data the social media channel collects about people, who has access to it, and some of the methods used to obtain data came to light in early 2018 during the notorious Cambridge Analytica scandal. The company worked with researchers to collect the data of millions of Americans without their knowledge or consent to use it for political purposes. The scandal resulted in Congressional hearings and brought attention to data privacy issues with social media channels as well as other tech giants.

Europe’s General Data Protection Regulation 2016/679 (GDPR) is a regulation enacted in May 2018. It addresses data privacy and data protection for people from the European Union (EU) and the European Economic Area (EEA). It also deals with data concerning EU citizens when it is transferred outside the EU and EEA areas. That includes the United States. Companies storing, collecting, and processing personal data are responsible for lawfulness and transparency in how they collect data, what they collect, how it is used, and how it is stored. They must have a lawful reason for collecting data and the person must consent to give their personal data. Data can only be retained for limited periods of time and an individual has the right to request that all of their information be erased at any time.

Certainly, a product like a dating app, including Facebook Dating, which collects highly personal information used for any online dating product would be subject to a Data Privacy Assessment as required by the DPC’s office.

Facebook is in the middle of a lawsuit with the US Internal Revenue Service (IRS). The company moved some assets to Ireland to avoid paying taxes to the US. If they lose the dispute, Facebook could end up owing the IRS some $9 billion USD.