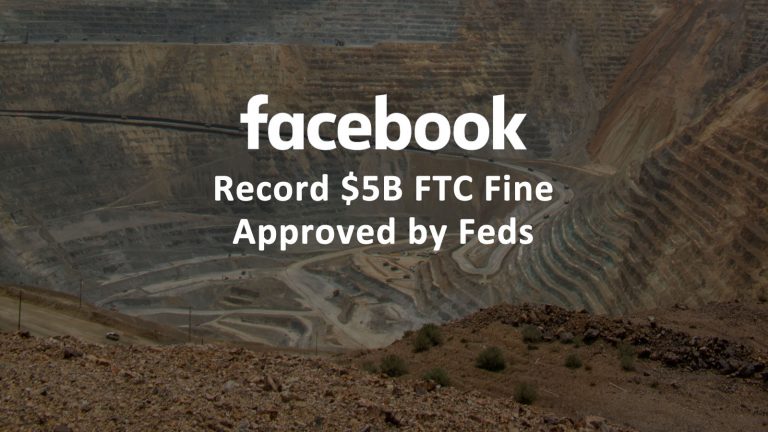 The US Federal Trade Commission (FTC) issued  a statement announcing that a US Federal Judge has finally approved the FTC’s settlement with Facebook. The fine is a record setting $5 billion USD and took ten months for the courts to finally approve the penalty. This monetary penalty is the largest fine ever obtained by the FTC.

The Facebook $5 Billion fine is part of a settlement between Facebook and the FTC for misuse of Facebook user data. Facebook and the FTC reached the settlement ten months ago in July 2019. As part of the settlement, Facebook has to submit quarterly reports on measures the company enacted to protect user privacy and personal information.  In June 2019 the FTC opened an antitrust investigation of Facebook. A month later, the US Department of Justice (DOJ) announced its own antitrust review of large online platforms.

US Federal Trade Commission Chairman Joe Simons stated, “As the Court notes, the historic $5 billion settlement is ‘by far’ the largest monetary penalty ever obtained by the United States on behalf of the FTC and the ‘second largest in any context.’

In February of this year, Facebook was forced to cancel the debut of its Facebook Dating service for European Union users due to data privacy concerns.

The FTC started its investigation of Facebook data mining and sharing practices in March 2018. The company’s use of their user’s data came to light during the infamous Cambridge Analytica data mining scandal. An analytics firm called Cambridge Analytica had profile data on an amazing 87 million Facebook users. The profile data was collected from a quiz app called, “This is Your Digital Life.” The app, deployed by Cambridge University lecturer Aleksandr Kogan, was in violation of Facebook policies. Logan also did work for the Trump presidential election campaign. The app not only farmed data of the participant, it also scraped their profile for data on all of their Facebook friends.

Facebook user data had been collected and compiled without individuals’ knowledge or consent. The FTC charges stated that Facebook did not divulge that the information was being shared with third parties. Users did not have the option to opt-out.