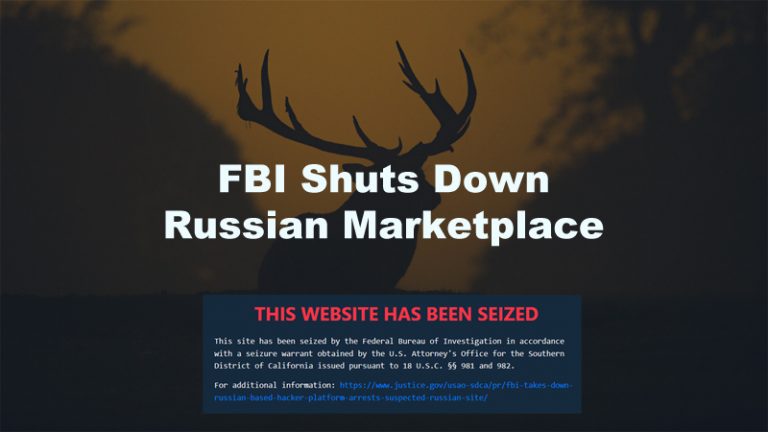 The US Federal Bureau of Investigation (FBI) announced the agency shut down a Russian-based online marketplace that specialized in selling compromised data and criminal services. The marketplace, DEER.IO, allowed hackers to set up online storefronts for a monthly fee to buy and sell stolen information and criminal hacking services. No legitimate companies were found to be buying or selling on the marketplace. DEER.IO was accessible to anyone online using any web browser. The reamains of the marketplac can be seen (Safely) here https://deer.io/

The marketplaces offered hackers individual storefronts where they could set up shop and sell compromised U.S. and international financial and corporate data, personally identifiable Information (PII) about employees, and hacked user accounts from U.S. companies. Anyone could purchase computer files, financial information, personally identifiable information (PII) for individuals, and login credentials to online accounts from computers infected with malware. Victims were located in the United States and overseas.

Alleged Russian hacker, Kirill Victorovich Firsov, was arrested on March 7 in New York City. He is suspected of being the DEER.IO administrator.

DERR.IO allowed hackers to buy and sell hacked data, accounts, and personal information through their own online storefronts they paid to set up and host on DEER.IO. Individuals could also hire criminal hacking services like buying and selling malware attacks. The marketplace was in business since at least October 2013. The marketplace claimed to have 24,000 active shops with sales over $17 million USD.

DEER.IO sold easy to operate pre-packaged online storefronts that hackers could use to sell their stolen data, financial information, and accounts. The template storefronts even came with product uploaders and other tools to make managing a store easier. The platform was maintained on Russian-controlled infrastructure and was publicly accessible on the clear web. The storefronts used cryptocurrency digital wallets to collect payments for the purchased products and services.

“There is a robust underground market for hacked stolen information, and this was a novel way to try to market it to criminals hoping not to get caught,” said U.S. Attorney Robert Brewer.

Firsov will be extradited to San Francisco where he will appear in court on 06 April and faces charges of Unauthorized Solicitation of Access Devices, 18 USC Sec. 1029(a)(6)(A)