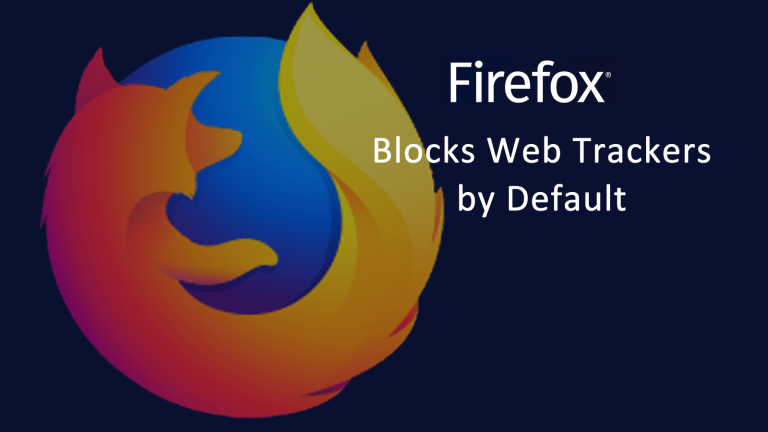 Firefox web browser was updated again to improve privacy for its users. Mozilla Corporation announced the update to Firefox which takes aim at major tech companies like Google and Facebook that track web users’ behavior across websites and sell that data to advertisers. The new Firefox update has cookie trackers blocked by default. Firefox users can still opt in or out of tracking if they so choose.

The goal is to stop thousands of companies that track and access web users’ personal data. New Firefox users will see that Enhanced Tracking Protection is turned on by default. Current Firefox users must adjust their privacy settings to block third-party cookies if they want the same protection from pervasive tracking and collection of personal data by ad networks and tech companies.

Mozilla noted in their release announcement that “25% of web page loads in Firefox take place in a Private Browsing window.” While this is good for hiding your web activity from others who use your computer, it does not block third-party trackers that Facebook, Google, and other advertisers use to track your behavior across the web.

Firefox will block more 2,500 tracking websites by default and will be updating the blocked list over time. As always, Firefox users can adjust their settings to block cookies, and choose which websites they allow tracking. When web users have a lot of pages and settings to go manage they may give up on achieving the privacy settings they want.

Mozilla Firefox, officially Firefox Quantum, is an open-source web browser owned by the Mozilla Foundation and its subsidiary, Mozilla Corporation. Firefox web browser is available for Microsoft Windows, macOS, Linux, as well as other operating systems.

As of March 2019, Firefox Quantum has 9.58% of the global web browser market. [1] Chrome is the leading web browser with over 69% of the market. Firefox has been losing market share for the past four years.

Is Firefox Quantum Different from Firefox?

Which is Latest Version of Firefox?

Firefox Quantum 67 is the latest version released on May 21, 2019. Firefox Quantum version 67 brought improved usability and security improvements. Users could choose which extensions to exclude from private tabs and to save passwords while in private browsing mode.

This new version of Firefox has more stringent cookie blocking features enabled by default. Previously, privacy settings were set to standard when a new user downloaded and installed the web browser. Firefox will still be set to standard, but this setting will now block third-party cookies right out of the box. It used to be that third-party cookies were blocked only when in private mode.

A web tracking cookie is a snippet of computer code written to a web users’ computer, phone, or other devices. It is used to identify and track the device, and thus the person as they use websites an apps. Cookies are divided into first-party cookies and third-party cookies. Many cookies are useful for user experience, like website language preferences. For example, a website may store your username and login as a first-party cookie and that’s okay. However, many websites use third-party services that track your behavior and web usage, with cookies, across every website you visit, without your consent. This is what Firefox blocks.

Firefox monitor is also being updated. This Firefox update is also the official launch of Mozilla’s new password manager, Firefox Lockwise. While not a full featured password manager, Lockwise is free and includes a dashboard to view and manage saved passwords across all devices. Lockwise mobile app users can only view login information saved while using the desktop version of Lockwise. Desktop Lockwise has the most options where users can edit, create and view all saved login credentials.

New Firefox users have third-party cookies tracking enabled by default. Those users who downloaded the web browser prior to this release can enable cookie blocking features.

Facebook Container is a Firefox addon used to block Facebook from tracking people across websites. Facebook tracks its users while using the desktop platform as well as the Facebook mobile app. However, it also tracks its users and non-users alike, across the web through its like and share buttons. Anytime someone hits a Facebook share or like button, that action is sent back to Facebook and associated with that web user. The aggregate user data is sold to advertisers who use it to target advertisements.