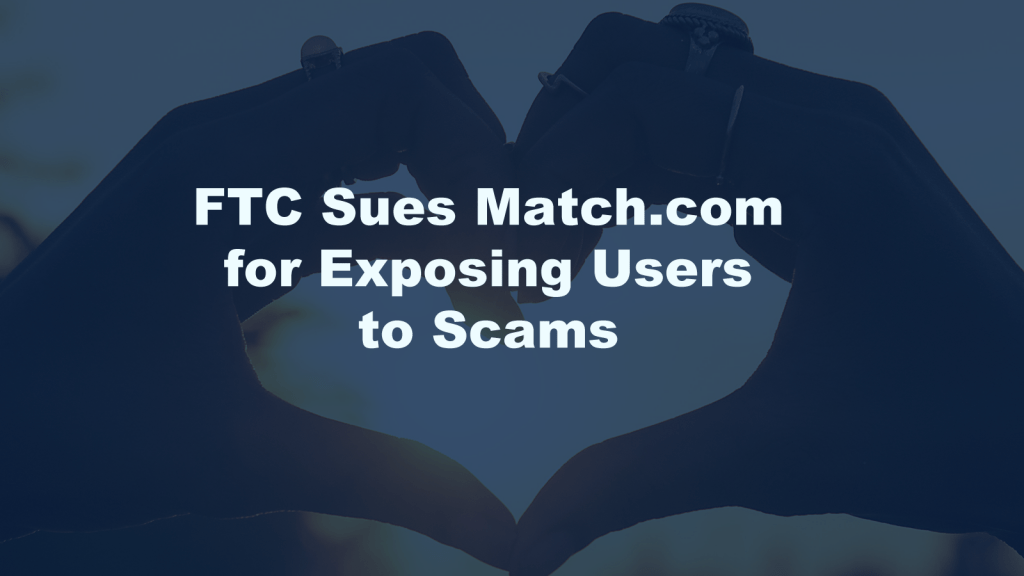 The US Federal Trade Commission (FTC) filed a lawsuit against dating website Match.com. The filing alleges that Match exposed users to scammers from fraudulent profiles and made it difficult to cancel subscriptions. The FTC complaint states that Match sent emails to account holders prompting them to buy a subscription to respond to messages that Match had already flagged as likely to be fraudulent.

It is estimated that 25 to 30 percent of new Match.com members register to attempt to defraud other members with romance scams, phishing emails, and extortion attempts. According to the FTC complaint, in some months between 2013 and 2016, over half of the instant messages and profile favorites came from accounts that Match had already identified as fraudulent. Hundreds of thousands of people looking for a relationship upgraded to paid subscriptions to Match.com after receiving an interaction from a fraudulent profile.

According to the FTC’s complaint, from June 2016 to May 2018, for example, Match’s own analysis found that consumers purchased almost 500,000 subscriptions within 24 hours of receiving an advertisement encouraging a free user to upgrade to see the contents of a fraudulent communication.

The FTC complaint alleges that millions Match’s “You caught his eye” messages came from accounts Match had already flagged as likely to be fraudulent.

According to the FTC filing, Match emailed uses with free profiles (non-subscribers) notifying them that they had received a message from another user. But the FTC complaint says that Match sent millions of these emails, notifying the non-subscribers that a message was waiting for them even when Match had already identified the sender as a scam account. By contrast, Match blocked scam messages from reaching paid subscribers.

When people with free accounts received likes, favorites, emails, and messages on Match.com, the dating site also sent emailed advertisements from encouraging them to become paid subscribers so they can view the sender’s profile and the message contents.

In a statement from Andrew Smith, Director of the FTC’s Bureau of Consumer Protection, “We believe that Match.com conned people into paying for subscriptions via messages the company knew were from scammers.”

Online dating services, including Match.com, are used to prey on people looking for a relationship. Scammers create fake profiles and are patient while establishing trust before asking for money or gifts. Romance scams top the list of online scams. In 2018, US citizens lost over $143 million to romance scams.

If you are the victim of a romance scam or any other type of scam, report it to the FTC website at ftc.gov/complaint.

Match.com is dating website and app with over nine million users in 40 countries. The site is owned by Match Group, Inc. which is based in Dallas, Texas. Match Group also operates Tinder, OKCupid, PlentyOfFish, as well as other dating sites.

Match.com users pay $20 to $30 per month for subscriptions depending on the length of the subscription. The monthly price can increase with a number of subscription add-ons users can buy.

The FTC complaint also alleges that Match violated the Restore Online Shoppers’ Confidence Act (ROSCA) by not providing a simple, clear method for subscribers to cancel their membership and terminate monthly subscriptions. The FTC complaint contends that the cancellation process confused subscribers with a hard to find and tedious process and ultimately prevented many consumers from canceling their subscriptions. This often led subscribers to dispute charges with their bank or credit card. Match would then ban these users from accessing the services they paid for.