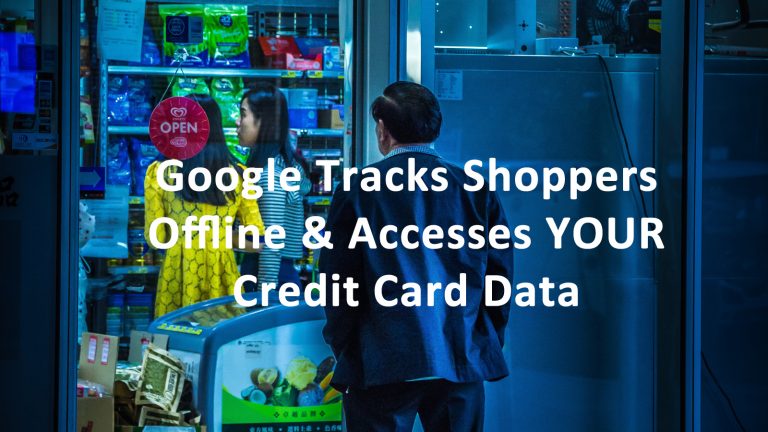 Google admits to violating internet privacy by tracking the online behavior of shoppers for quite some time. That includes websites internet users visit as well as what they purchase online. But now, Google announced it is tracking shoppers offline as well!

Google has long tracked the online shopping behavior and interests of people shopping using web browsing, search history and geographic locations and data from Google-owned apps such as YouTube, Gmail, Google Maps and the Google Play store. But Google announced it is now using billions of credit-card transaction records to understand which ads compel users to shop offline as well. This internet privacy concern applies to those using Google internet apps and services in the US, Canada, and the United Kingdom.

Google now tracks offline shoppers by coordinating data from the apps, Google Maps, and in-store credit card purchases. Google has confessed that it does keep information about the individual shoppers, what they purchased, where, and the transaction amounts.

Google’s data mining activities apply to all apps that are available in the Google Play store whether the apps were developed there or somewhere else!

This is a major concern for privacy advocates. Many Chrome browser users do not realize to what extent they are being tracked. People also have no education on how they can limit the amount of data that Google mines from them.

This offline tracking is part of a push to prove to advertisers that the ads they purchase from the Google AdWords platform are a successful and efficient part of any marketing campaign. The shopping data is especially important. Advertisers can never be certain if an online ad caused a shopper to go to the store rather than buy online. Google maintains that is the case and intends to prove it to advertisers by providing the transaction details coordinated with which ad the shopper was served.

For example, let’s say you are reading a news article on the New York Times online, and are served an online advertisement from retailer Nordstrom. One week later you walk into the store and buy two pairs of shoes. Google can now prove to Nordstrom that their advertisement played a part in your purchase decision.

Google would not disclose who they are contracting with to help mine and coordinated all the data they are taking in. It appears that as Google invades internet users’ privacy more, the become less transparent about their practices. Google now retains data that is traceable to individual shoppers – online and offline. This means that if you are logged in to any Google app, then your web surfing activities and shopping purchases are being tracked and they are traceable to you. However, Google maintains that shoppers’ individual identities are not being passed onto retailers and advertisers. Users identification (which Google does have access to and does retain) is swapped out with an identifier that cannot be coordinated with an individual.

The search giant also claims that interest users’ identity is not at risk. Google assures the public that their data is secure.