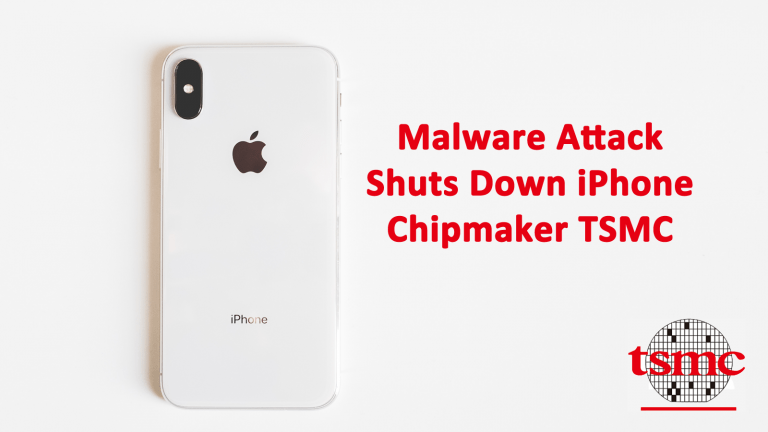 iPhone Chipmaker, Taiwan Semiconductor Manufacturing Company (TSMC), shut down after a hacker malware attack over the weekend. The malware affecting TSMC is a variation of the infamous Wannacry ransomware and caused two days of outages. TSMC’s systems are said to be 80% recovered with all factories back on-line. However, the outage time caused a backlog in production.

TSMC, makes the processors for Apple’s iPhone and is the sole manufacturer for Apple’s latest A-series SoC. The company is also a contract chipmaker for Qualcomm.

TSMC denies that it had been hacked and that the malware attack is the result of human error. TSMC Chief executive CC Wei told Reuters news agency, “It’s impossible that humans would never make mistakes and we have changed the system to automatically detect [the virus] and such a mistake would never be made again.”

TSMC officials reported that the malware infiltrated TSMC’s system during a software installation process. Once the system went online, it was off to the races with the hacker malware. No personal or corporate data was compromised.

All smartphones are powered by a chip. The new iPhones, including the upcoming iPhone X, use one called an A11 Bionic. The iPhone 7 has the Apple A10. Chip. The iPhone 6 and iPhone 6 Plus both use the Apple A8 is a 64-bit ARM-based system on a chip (SoC) designed by Apple Inc. Smartphone chips have complex circuitry that contain hardware blocks as well as a graphics processing unit, or GPU. The GPU is powerful for computation involving large arrays of numbers. That computing power is behind the beautiful graphics on your iPhone’s screen.

What is Wannacry malware?

WannaCry is the ransomware cyber-attack that took Europe in 2018 May. UK’s National Health System (NHS) was one of the largest victims. Wannacry only affected Microsoft Windows computers that were not patched. Microsoft had release an updated for Windows operating systems back in March 2017, two years prior to the European hacker attack. In the end, 74 countries were affected including the UK, US, China, Russia, Ukraine, Spain, Italy and Taiwan.

Wannacry takes over control of the infected machine and locks out the rightful user. The malware demands $300 (£230) in Bitcoin to return access to the infected computer.
Wana Decrypt0r, also known as ‘WannaCryptor’ or ‘WCRY’ is a variant of malware WannaCry and based on the (NSA) hack tool known as Eternal Blue

TSMC is one of the world’s biggest contract semiconductor manufacturers and has an annual revenue of 947.9 billion TWD. Subsidiaries include Singapore’s Systems on Silicon Manufacturing Co. Pte. Ltd., QUALCOMM Panel Manufacturing Ltd., TSMC Korea Limited, TSMC Europe B.V. and more. The company is based in Hsinchu Science and Industrial Park in Hsinchu, Taiwan