AskCyber Home » News » News » Healthcare.gov Hack Leaves 75K Exposed – Are You One Of Them? 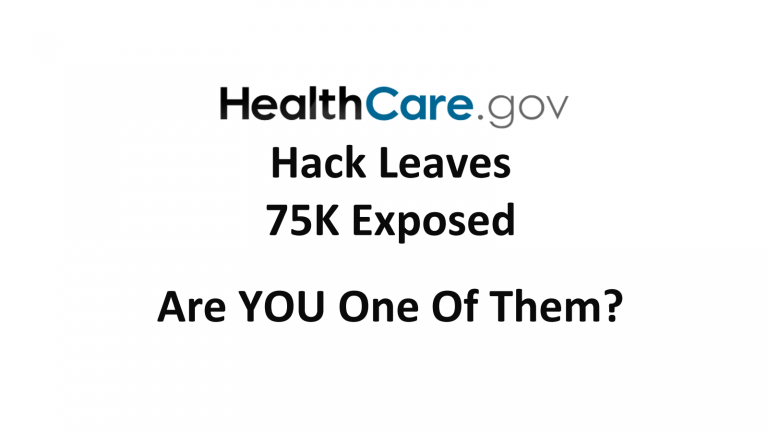 The Federal Centers for Medicare & Medicaid Services (CMS) reported a data breach that leaked the personal information of an estimated 75,000 health insurance subscribers that sign-up for health insurance under the Affordable Care Act (ACA). Many know this sign-up process from the website Healthcare.gov or ACA’s common name, Obama Care. On October 13, 2018, suspicious activity was discovered on the the Federally Facilitated Exchanges (FFE) – Direct Enrollment pathway for insurance agents and brokers. It was reported on October 16 in a statement from CMS.

Hackers breached an online Affordable Care Act sign-up system used by insurance agents and brokers. The portal is used to help consumers apply for healthcare coverage on Healthcare.gov The hack does not affect the Healthcare.gov sign-up website used by the general public.

The hack was discovered on October 16th and confirmed three days later By CMS on October 19th. At that time the suspicious insurance agent and broker accounts associated were deactivated. In addition, the entire sign-up system was shut-down. It is expected that sign-up system will be up and running by October 27th, in time for the open enrollment period that begins on November 1st.

All other FEE enrollment options are still working including Healthcare.gov and the Marketplace Call Center, are running. CMS is working to identify the individuals affected by the hackers

CMS plans on notifying those potentially affected by the data breach “as quickly as possible” although no time frame and mode of communication was specified.

What is the Federally Facilitated Exchange?

The Federally Facilitated Marketplace (FFM) is a federally facilitated marketplace for health insurance plans. It is operated by the U.S. Department of Health and Human Services. Twenty-seven states opted to participate in the FFM after healthcare was mandated under the Affordable Care Act, colloquially known as ObamaCare. The Federally Facilitated Exchange (FFE) is carried out on Healthcare.gov and though call centers.

What is the Affordable Care Act?

The Affordable Care Act (ACA), is formally known as the Patient Protection and Affordable Care Act and informally as ObamaCare. ACA is a federal statute enacted by Congress on March 23, 2010. The statute requires that all United States citizens carry health insurance. The FFM was established to facilitate health insurance sign-ups for individuals that do not have coverage through their employers.