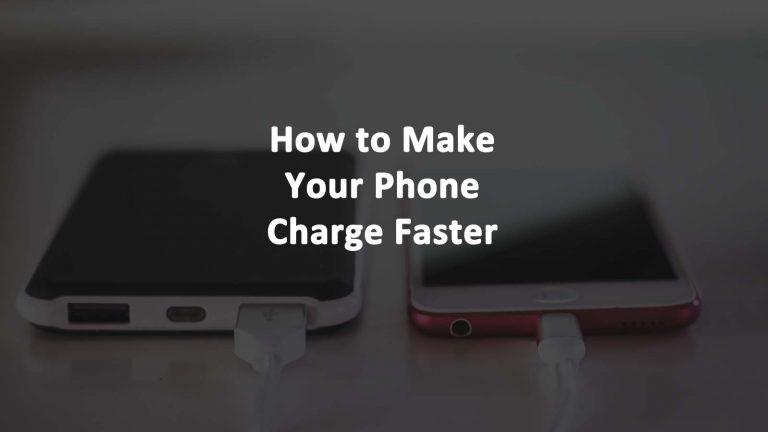 Why Is My Phone Charging So Slow? What to Do About Apps That Drain Your Battery – Common Culprit Apps

If you’re wondering how to make your phone charge faster, you’ll need to visit the settings area of your phone’s apps and operating system. Background data usage, Bluetooth, and WiFi connections are some of the biggest culprits using up battery life and preventing how to charge your phone faster and making your phone run slow. To optimize your phone, you may even have to disable or delete phone apps. Many phone apps run in the background connections to open WiFi connections. They may also use your wire your cellular data connection for constant updates for new messages emails, and for tracking your location. How to make your phone charge faster will require limiting app permissions and adjusting settings for optimum performance and battery life.

Below are six apps that almost eveyone has that may leave you wondering how to make your phone charge faster.

Facebook is a social media app for you to access the world’s largest social media channel. Facebook is notorious for its large file size and the tendency to drain phone batteries. Facebook’s mobile app is also very intrusive. The smartphone app tracks your location, who you’re friends with, your interests, behaviors, purchase, and your location. Many people believe that the Facebook app records conversations and uses it to show advertisements. Facebook uses the information it collects about users and sells it to advertisers.

You can download Facebook Lite from Google Play or the Apple Store and make your phone charge faster.

Facebook Messenger referred to is simply Messenger, is a messaging app owned by Facebook. Messenger also drains phone batteries while its running with default pops up notifications and status monitoring. Messenger can cause your phone to operate slowly because of features including stories and in-app advertisements. The Messenger is a performance killer just like its parent app Facebook.

One way to speed your phone up and use less data is to log out of Messenger when you’re not using it. However, you won’t be notified if there is a message waiting for you which sort of defeats the purpose of a messaging app.

I have Messenger Lite downloaded to my Samsung phone. It’s much faster to use and it doesn’t drain my battery extraordinarily. I still receive all notifications for waiting message but there are not stories. Therefore, my phone charges faster. if there is a message waiting. You can still connect with anyone who uses Messenger, Facebook, or Facebook Lite. You’ll also be able to send photos, files, links, and make voice and video calls over WiFi. The call quality is very good.

If you want to make your phone charge faster, download Messenger Lite from Google play or the Apple store. Better yet, start using a messaging app, like Signal, with end-to-end encryption minus the tracking.

Bluetooth is not an app but a technology that comes standard on all phones. It’s a short-range wireless technology that lets phones exchange data with other smartphones, automobiles and point of sale terminals. Bluetooth can be used to connect to your car so you can send and receive calls, use maps, or listen to music from your phone while driving.
However, if you leave Bluetooth turned on, your phone’s battery will drain noticeably faster and other apps will slow down. The only way to combat this is to make sure that you turn off your Bluetooth connection when you’re not using it. This will also make your Phone more secure.

If you’re not using your WiFi connection for example if you’re in an area where there is a poor WiFi connection, then shut it off completely. Like Bluetooth, leaving your Wi-Fi turned on uses up battery life faster and can make your phone run slowly. I found that leaving my WiFi on when I’m on an airplane to access inflight entertainment, even if my phone is in airplane mode, can kill my battery in 30 minutes and make it charge slowly.

If you are in an area with a very poor WiFi connection like in a large building or in a school, you’ll find that many apps, including web browsers simply won’t run. If they do work, they are very slow. Turn off your Wi-Fi temporarily to speed your phone up. You can use your data connection if it is strong enough or use apps offline.

To make your phone charge faster, shut down Google Maps and turn off location tracking. Google Maps can be one of the most frustrating apps to use on a phone because it is very slow to open, it uses a lot of data, and sucks battery life. Google Maps tracks your location even when the app is closed and saves you whereabouts on your Google Timeline. Location data uses a lot of battery life and makes other apps on your Phone run slowly.

The most recent version of Google Maps attempts to stay on top of all other apps. This makes it difficult to place calls or use other apps. It can be unbearable to open Google Maps to get simple driving directions. The app tries to predict where I’m going, what I’m typing, and attempts to show me nearby places, and my travel history. It’s maddening especially because I, not interested in any of it.

One way to optimize Google Maps is to turn off the location tracking or make the tracking less precise. This will affect performance, but it speeds up your phone.

I switched to using Waze as a mapping app. Unfortunately, Waze is also owned by Google and does not work internationally. Waze is much lighter to use and runs faster. It also doesn’t interfere with other apps or make your phone slow. I do find that Waze crashes a lot and sometimes doesn’t always take me on the best path.

Smartphone weather apps can be extremely frustrating to use. They load slowly and can often interfere with other apps on your phone. They pop up advertisements and auto play dramatic news videos. Many weather apps are also installed as lock screen widgets which means the weather app is on top of the display all the time. Widgets display the weather and time even if the phone is locked. Weather apps use up a lot of battery life, are slow to load, and make it difficult for other apps to run because they use up so much memory.

Weather apps also track your location to pinpoint weather forecasts, but the tracking can also be an intrusion of your privacy as weather apps may sell data to advertisers.
Check your weather app settings and make sure it doesn’t have any unnecessary permissions. There’s no reason for a weather app to have access to your phone contacts, photos, or your call history. If your weather app has requested permission to any of these, delete the app and find a lighter weather app.

Don’t use your weather app as a widget on your smartphone lock screen. Just use the weather and access it by tapping an icon, just like you would any other app. You’ll find that other apps and your phone operate more efficiently without lock screen widgets and animations.

Before you download and install any new app, read a few reviews and find out if there are complaints. Don’t use any app that asks for intrusive or unnecessary permissions. For example, flashlight apps do not need to access your phone contacts, images, or call history.

Keep apps updated with the latest patches. New security bugs can be found at any time. App developers send security patches to protect your phone from being hacked and to optimize features. Out of date apps may result in a slow phone.

When an app receives an update, revisit the app’s permissions in the settings area of your phone. During an update, you may have also inadvertently agreed to new terms of service or a change in the privacy policy that is intrusive. Check permissions for your app by going to phone settings. Find the app name and check on what personal data it has access to. If you cannot limit access, then delete the app. For a faster phone, you should also limit or stop the app from using background data even after it is closed.

When you receive an operating system update from your wireless provider, revisit permissions for all apps on the operating system itself. Make sure your phone is not using any unnecessary background data for notifications, location tracking, or memory usage. This will cause your phone to run so slow that is frustrating. Your phone and app may also be giving away your personal information about your location and activity.