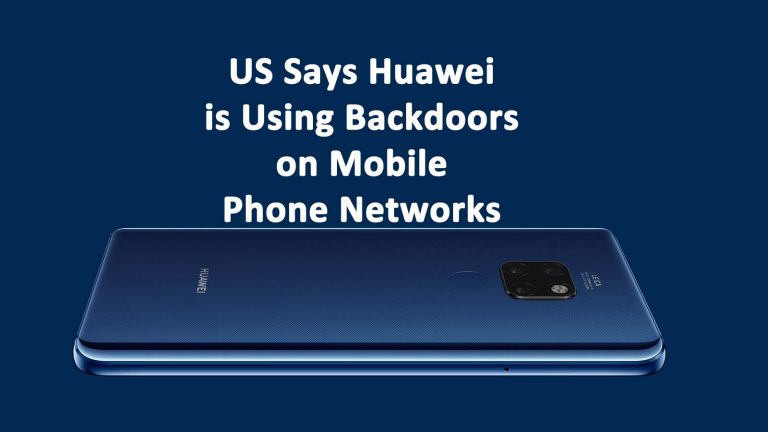 US National Security Advisor Robert O’Brien says that Huawei Technologies Co. can covertly access mobile phone carriers’ networks through back doors designed for use by law enforcement. The Wall Street Journal reported the accusation by US officials. The US has a history of distrust with Huawei and its relationship with the Chinese government. US officials claim the backdoor access was seen on 4G equipment. Huawei was banned from doing business with the United States in a 2019 defense spending bill.

O’Brien maintains that Huawei has backdoor access on telecom systems it maintains and sells globally. The access to telecom networks, which are built in for law enforcement use, were allegedly accessed to monitor private communications and to spy on other governments. The backdoors exist in base stations, antennas, and switching equipment.

The United States has never provided proof of this or any past allegations of espionage or the existence of backdoors in Huawei phones. Although the US claims they have shared their evidence with other governments, Microsoft maintains the US has no proof.

The post in today’s Wall Street Journal stated that, “The US kept the intelligence highly classified until late last year, when American officials provided details to allies including the UK and Germany, according to officials from the three countries. That was a tactical turnabout by the US, which in the past had argued that it didn’t need to produce hard evidence of the threat it says Huawei poses to nations’ security.”

Huawei denies the allegations. At the 2019 World Economic Forum, Huawei chairman Liang Hua stated, ““If they believe there’s a backdoor, they should offer evidence to prove it”

Britain Gives Huawei to Go Ahead

Despite pleas from the United States, the United Kingdom agreed last month to have Huawei build their non-core 5G data network. However, the approval comes with some restrictions. Huawei is considered a high-risk vendor and cannot be involved in some core ore parts of the UK’s 5G networks or work in sensitive geographic locations. US Secretary of State Mike Pompeo asked UK Prime Minister Boris Johnson to reconsider its decision.

Following the UK decision to go ahead with Huawei, the European Union also added guidance on non-core 5G network infrastructure that would also allow Huawei in. Because of the ban on core 5G work, Vodafone stated it will have to remove Huawei equipment and that it could take up to five years to implement the changes.

Save $100 on Samsung Galaxy Unlocked Phones
Plus Free Shipping!

Huawei Technologies Co., Ltd is a technology company headquartered in Shenzhen, Guangdong, China. The company was founded in 1987 by Ren Zhengfei who is a former deputy director of the People’s Liberation Army engineering corps. Because of this the US feels that Huawei maintains a close relationship with China’s Communist government.

In 2018, the United States passed the National Defense Authorization Act for Fiscal Year 2019 (NDAA 2019). The defense funding bill barred the US Federal government from doing business with Huawei and several other Chinese vendors of surveillance products, due to security and espionage concerns.

Wireless Carriers Verizon and AT&T decide not to work with Huawei or offer wireless plans for their equipment. After that, electronics retailer, Best Buy, stopped selling Huawei phones but bought a few models back to thier websie. They are still for sale on Amazon.

In early December 2018, Huawei Vice Chairwoman and CFO Meng Wanzhou was arrested in Canada at the behest of U.S. authorities. Wanzhou is founder Zhengfei’s daughter. She was charged with 13 counts of bank and wire fraud, obstruction of justice, and misappropriating trade secrets. The wire fraud was an attempt to hide Huawei’s deals with Iran which circumvent UN sanctions against Iran

The US DOJ Indicted PLA Personnel on Hacking Charges

This week the US Department of Justice indicted four Chinese People’s Liberation Army (PLA) personnel. They were charged with nine counts related to the massive Equifax data breach of 2017. In that cyber security incident, the sensitive data of about 148 million people was stolen over a period of seven months. The data included Social Security numbers, names, birthdates, payment card numbers, addresses, and in some cases passports.