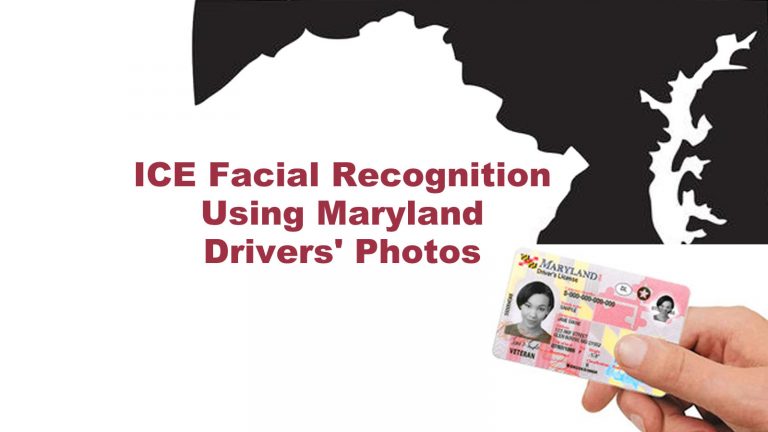 US Immigration and Customs Enforcement (ICE) is running facial recognition scams on millions of photographs taken from Maryland driver’s licenses according to The Washington Post. ICE agents across the country are using facial recognition technology to match photographs of unknown people with photos in the Maryland system. It was unclear when or how this began in I that state.

In 2013, Maryland became the one of the first states to offer driver’s license to undocumented immigrants. Since then, the state has issued over 275,000 such licenses. Fourteen other states and the District of Columbia also have enacted laws to allow unauthorized immigrants to obtain driver’s licenses. These states are California, Colorado, Connecticut, Delaware, Hawaii, Illinois, Nevada, New Jersey, New Mexico, New York, Oregon, Utah, Vermont and the state of Washington.

According to The Washington Post article, “A top official from Maryland’s Department of Public Safety and Correctional Services, told state lawmakers in November that ICE officials had logged nearly 100 sessions in the state’s driver’s license database since 2018.” Each login could represent an unlimited number of searches.

This affects everyone in Maryland, not just immigrants. State Senator Clarence Lam said regarding the ICE photo searches, “They have a wide-open door to be able to search through anything in this database.”

According to a July 2019 Washington Post report, the FBI has conducted over 390,000 facial recognition searches using federal and local databases since 2011. But Congress, nor state legislatures, or any elected official has authorized the development of a mass facial recognition system that enables law enforcement to search information about people, most of which have not been charged of any crime. Individual license holders have not authorized the use of their photos or information in databases accessible to ICE facial recognition or any law enforcement. They were simply signing up for a driver’s license.

“If you’re a U.S. citizen and thinking ICE facial-recognition searches don’t affect you, you’re wrong,” said Harrison Rudolph, a senior associate at Georgetown University Law School’s Center on Privacy and Technology. “With face recognition, the question is not whether you are an immigrant but whether an error-prone technology thinks you look like an immigrant.”

Where is Facial Recognition Used?

Facial recognition searches can affect anyone at any time – not just if you are an undocumented immigrant, criminal, or someone suspected of a crime. It is about whether a computer algorithm determines that you are a match for someone in another photo or criminal database. There has been and can be a mismatch for anyone. Some facial recognition algorithms are especially inaccurate for non-white people or if the photo is too dark, too light or too grainy.

For years, ICE facial recognition searches have been using driver’s license databases in Utah, Vermont, and Washington to match a photo to an identity. However, in those states ICE must have a state official run the search for them. Driver’s license photos are collected by Maryland’s Motor Vehicle Administration. The photos, along with names, addresses, and more for about seven million drivers, is stored in the Maryland Image Repository System database which is maintained by Maryland’s Department of Public Safety and Correctional Services.

New York is the latest state to grant licenses to undocumented immigrants, sparking a dispute with the Department of Homeland Security. DHS will no longer allow New York State residents – drivers or not – to enroll in or renew existing Trusted Traveler programs like Nexxus and Global Entry. That’s because New York’s governor has refused to give federal agencies access to driver’s license holder data.

New Jersey will begin issues driver’s licenses to undocumented immigrants staring on June 1 of this year. The new law prohibits the motor vehicle commission from disclosing information to any federal, state, or local law enforcement agency for immigration purposes without the consent of the individual, a warrant, court order, or subpoena.

Moving Closer to Being a Surveillance State

It was announced today that Clearview AI, another company that collects images of citizens – criminal or not – stores them and sells subscription services to law enforcement was breached. Police agencies, banks, and other law enforcement can access Clearview’s database of over three billion photos taken from people’s social media accounts – without their knowledge or consent.

The FBI maintains its own repository of 600 million people’s photos.

In 2019, Delta Air Lines opened the first biometric terminal at its hub in Hartsfield-Jackson Atlanta International Airport. The biometric check-in process uses facial recognition in a program called The Traveler Verification Service. The service is a cooperative effort with Delta, U.S. Customs and Border Protection (CBP), and the Transportation Security Administration or TSA. Photos are taken from passports.

In June 2019, CBP announced that hackers stole photos from cameras used as US land border. The images included photographs of people’s faces taken while they rode in their automobiles as well as license plate images Perceptics, the government contractor involved in the breach, is supposedly the only provider of license plate reader technology at U.S. land borders.