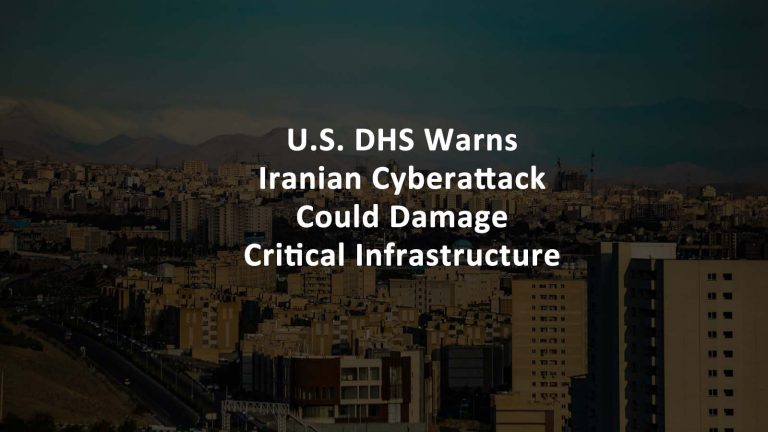 U.S. Department of Homeland Security (DHS) warned the public about the potential damage that Iranian cyberattacks could cause U.S. businesses and individuals. On the heels of the assassination of Iranian commander Qasem Soleimani and the threat of ‘forceful revenge,’ defense and intelligence officials are bracing for a volley of Iranian cyberattacks. The cyberwarfare could be devastating. Incapacitation or destruction of critical infrastructure would have a debilitating effect on security, national economic security, national public health, manufacturing, or safety.

DHS issued a National Terrorism Advisory System (NTAS) Bulletin renewing concerns for Iran cyberattacks capabilities. Current political tensions may involve a new warfront – cyberwarfare – that has little precedent or rules. The bulletin states that “Previous homeland-based plots have included, among other things, scouting and planning against infrastructure targets and cyber enabled attacks against a range of U.S.-based targets.” But the bulletin goes on to assure that, “At this time there is no specific, credible threat against the homeland.”

Businesses are bracing for a potential onslaught of cyberattacks that Iran may launch as revenge after a U.S. airstrike killed Iran Revolutionary Guards Corps Quds Force commander Qasem Soleimani in Baghdad. The potential uptick in network-enabled spying and damaging cyber attacks will most likely focus on critical infrastructure especially government systems.

Iran has launched successful cyber attacks against the United States. Their first attempts in included rookie distributed-denial-of-service (DDoS) cyber attacks and basic webpage defacements in 2009. A website defacement is what happened on 04 January when the U.S. Federal Depository Library Program (FDLP) was hacked and defaced with anti-U.S. President Trump messaging. The incident is a nuisance but not especially damaging.

In 2012, hackers targeted and manipulated search query commands on the Navy Marine Corps Intranet. In 2013, an Iranian hacker breached the control system of a dam in Rye, New York. In 2015, Iranian hackers deployed wiper malware in a cyber attack on 35,000 office computers owned by Saudi Aramco. This still shows some lack of higher skilled as compared to Chinese, Russian, and US Hackers who can attack the control systems.

What are the Critical Infrastructure Sectors?

Presidential Policy Directive 21 (PPD-21) identifies sixteen critical infrastructure sectors whose assets, systems, and networks are considered vital to the United States. They are listed on the DHS website. Their incapacitation or destruction would have a debilitating effect on national security, economic security, public health or safety, or any combination of the aforementioned areas.

To defend against APT hacking groups, organizations should practice data breach and emergency response simulations. System administrators need to have increased vigilance especially during periods of political tension and ensure that their IT security systems are patched and kept up-to-date. All employees including non-technical employees should be trained in cyber security awareness and best practices. Phishing email detection and response needs to be highlighted cyber security awareness training.

What Is A Cyber Attack?

A cyberattack is any type of malicious action that targets and attempts to disrupt or damage computer systems, network infrastructures, software, apps, computer networks, or personal devices. Cyberattacks may steal information from, alter, destroy, or erase vulnerable systems, devices, or programming.

What Was the Cyber Attack on Iran?

Stuxnet is a family of malicious computer worms first seen in 2010 but suspected of having been in development since 2005. Stuxnet attacks Supervisory Control and Data Acquisition (SCADA) systems which are computer control systems for industrial plants, manufacturing facilities, and power plants. Stuxnet was used in an American-Israeli cyber attack to damage the Iranian nuclear program. It damaged about one fifth of Iran’s nuclear centrifuges.

What is Cyber Warfare?

Cyber warfare is an attack using the internet to damage, disable, or erase equipment or data on computers, servers, information networks, routers, smartphones, tablets or other internet connected devices. Cyberwarfare is carried out by a nation-state or other organization through phishing campaigns, malware attacks, computer viruses, or denial-of-service attacks.

For all computer and smartphone users, strong passwords, and anti-virus software and two-factor authentication (2FA) are a must.

What Are the Types of Cyber Attacks?