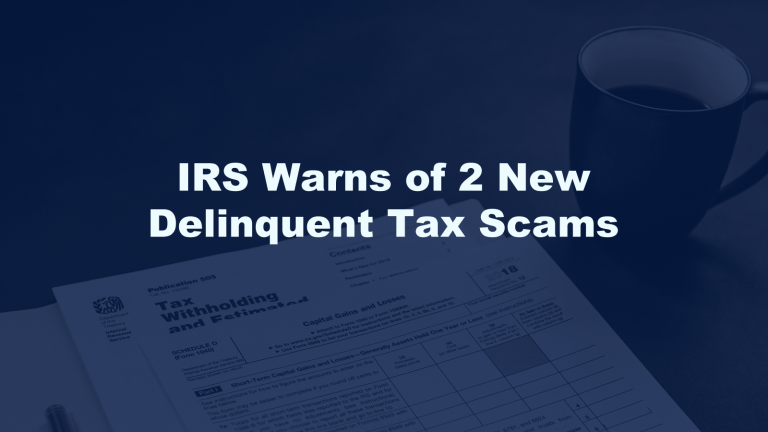 The US Internal Revenue Service (IRS) is warning taxpayers about two new tax scams. Even though tax season and the height of tax scam season are in past, there is an increase of reports of two tax scams. One tax scam involves delinquent taxes and the taxpayer Social Security numbers. This one is a threatening robocall telephone scam. The other is a fraudulent tax agency, Bureau of Tax Enforcement, contacting taxpayers about past due taxes.

This latest variation of an IRS tax scam features scammers claiming to have the ability to suspend or cancel a taxpayer’s Social Security number. In this newest version of the social security number scam, a robocall is directed at taxpayers’ phone number. The message tries to intimidate the recipient into thinking they owe delinquent taxes. According to the IRS, the message also threatens to suspend or cancel the taxpayer’s Social Security number. The goal is to get the scared taxpayers to hand over credit card numbers or other payment information to the scammer.

Scammers are always changing the content or delivery methods of tax scams to stay ahead of authorities. In one variation of this tax scam, the robocall informs the victim that a warrant will be issued for their arrest if they do not return the call. Still, in other versions of the phone scam, taxpayers are threatened with police action, deportation, or revocation of their drivers’ license.

This is not the first IRS tax scam that involves social security numbers. This one is similar to the IRS Impersonation scam. In that version of an IRS phone scam, the caller also attempts to intimidate the victim by telling them they owe delinquent taxes. The caller uses a spoofed phone number to convince the victim that the call is coming from an IRS office phone number. It is not. CallerID technology can be hacked to make it look like an incoming phone call is originating from any number the scammer chooses.

How Are CallerID Numbers Spoofed?

Scammers can fake, called spoofing, caller ID numbers to make the incoming call appear to be anywhere, including any IRS office. Fraudsters can spoof police offices, motor vehicles department, federal agencies, or any number to convince taxpayers the call is legitimate.

Once a victim answers the phone call, the scammer works to scare them into thinking they owe overdue taxes and attempts to force them to pay the taxes over the phone.

How to Identify the IRS Social Security Number Tax Scam

A pre-recorded, generic robocall is a tipoff that a call may be a phone scam. The IRS does not leave recorded voicemails with threatening messages. In general, the IRS usually sends a letter using regular US Postal mail delivery to inform someone of a tax issue. This includes overdue tax notices.

No one, including the IRS, can cancel or suspend a Social Security number. It is simply not something that is done.

This IRS tax scam involves a phishing email or mailed letter from a fake tax agency called the “Bureau of Tax Enforcement.” In the fake tax agency scam, a letter is sent to the intended victim also claiming that the taxpayer owes money for delinquent taxes. The letter threatens the taxpayer with a lien or levy on their home or other property.

The Bureau of Tax Enforcement does not exist. To make the letter sound legitimate is may mention the IRS in an attempt to fool the recipient. The goal is to collect personal information through phishing emails and to get the recipient to call the number listed on the letter. Once contact is made the scammer urges the victim to pay their supposed delinquent tax bill over the phone.

I Suspect an IRS Tax Scam – What Do I Do?

The Internal Revenue Service does not initiate contact with taxpayers through robocalls, personal phone calls, or through emails. Contact is always made by sending a latter using US Postal mail service. The IRS will never ask a taxpayer to give personal information because they already know the information they need from your legitimate tax forms. The IRS will not take payment over the phone with credit cards or banking information.

The IRS does not threaten to have a taxpayer arrested for not paying their taxes. People always have the opportunity to question or appeal tax bills. The IRS does not accept gift cards or prepaid debit card for payment of tax bills. This is a tactic used by scammers to make the transaction untraceable. Wire transfer are also not a payment method the IRS accepts. A legitimate IRS agent will not ask for credit or debit card numbers over the phone.

The IRS mails tax bills to any taxpayer who owes taxes. Payment checks should be addressed to the U.S. Treasury and no other third-party, ever.