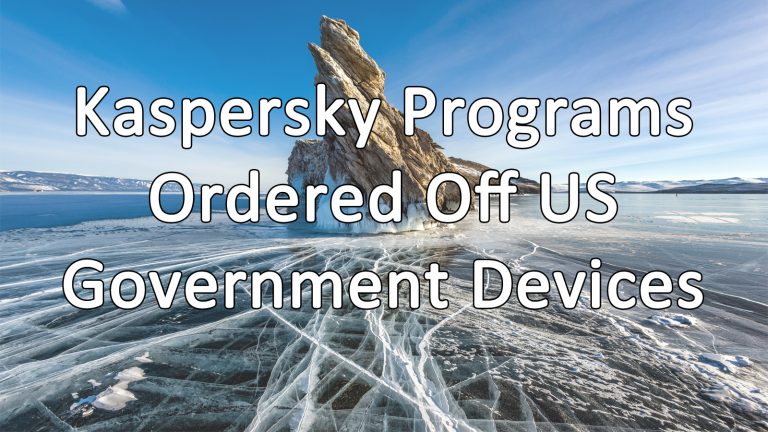 It’s finally happened, the US Government officially ordered all Kaspersky software off of their computers, workstations and other devices. Kaspersky Lab is a cyber security company headquartered in Moscow, Russia and started by Eugene Kaspersky. Kaspersky Lab has been under fire from the US Government for some time due to its founder’s ties to the Russian intelligence community. US Federal agencies are concerned about Kaspersky working with Russian agencies to gather information from computers running their programs. Anti-virus software is close to malware, and it can get anywhere on your computer. (Fun activity, install several anti-virus programs and run them all at once. Watch the sparks fly.)

The US Government is also concerned that even if Kaspersky isn’t actively listening in to what’s going on, that there may be backdoors installed in their programs that would let them do so. Best Buy has removed Kaspersky products from their shelves and website, removing one of the largest outlets for buying them. Kaspersky has categorically denied any and all claims that is in league with the Russian government, stating that their only interest is providing effective software. There is another worry about using Kaspersky, any secondary data collected by their programs may be passed along as well. How long it takes for users to respond, how they respond and how effective an attack was. This information is invaluable because it would allow the owner of it to formulate more effective attacks.

US Agencies will have 90 days to scrub all traces of Kaspersky programs from their systems. The Russian government feels that this move reduces the credibility of the idea that the United States is an effective business partner. The banning of Kaspersky may just be one more move in the game of one-ups-manship that has plagued United States-Russia relationships lately. Kaspersky is not the only victim of a federal tech embargo, China is also seeing sales of US tech being restricted. The government denied the purchase of Lattice Semiconductor by the Chinese based Canyon Bridge Capital Partners. China’s loose intellectual property rights were brought up as the reason for denying the acquisition, due to the fear that owning Lattice Semiconductor would open up other US manufacturers to intellectual property theft by Chinese companies. US-China investing and other financial transactions have been under increased scrutiny as of late, and there is a rising concern about how much of the United States military relies on Chinese made technology. Computer parts and chipsets are all largely imported from China and Taiwan, and it’s a very real possibility that any hardware may come infected with something out of the box. In the early 2000’s there was an issue where an entire batch of guidance chips for the US Patriot Missile system, all from China, were faulty and would perform their calculations incorrectly. While it was eventually determined to be unintentional, the risk of intentional sabotage is very high. Ensuring quality control over millions of chips would be time-consuming, and isn’t practical. Hence the increased scrutiny towards Chinese manufacturing and investing in the US tech sector.