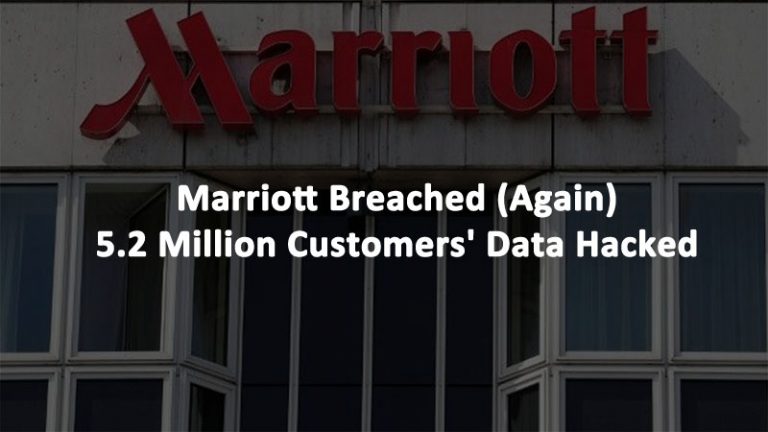 Another Marriott data breach was disclosed today by the hotel and resort chain. This time the information from 5.2 million customers was hacked. The breach notification was posted on the company’s website. The post states that hackers used login credentials stolen from two franchise property employees to access the corporate database. The company discovered the breach at the end of February but did not give a specific date. Marriott International sent emails to all hotel guests impacted by the data breach today. The company is still investigating the incident.

This is the second major data breach for Marriott is less than sixteen months – both incidents involved millions of their customers private information. The last Marriott hack saw passport information and customer details of over 500 million Starwood brands guests stolen over a two-year cyber attack that went unnoticed.

It is believed that hackers gained access to the customer data in mid-January 2020 until it was discovered in February. The attack was stopped by disabling the login credentials for the two compromised employees accounts. The notice from Marriott states, “At this point, we believe that the following information may have been involved, although not all of this information was present for every guest involved:

It does not appear at this time that Marriott Bonvoy (the company’s loyalty program) account passwords or PINs were hacked. At this time, Marriott does not think that passport information, driver’s licenses, or other government IDs were stolen. However, it is common during investigations to find that the number of affected people and how much of their information was stolen is increased as investigators uncover details and attack vectors.

Marriott set up a website where customers can check to see if they are impacted by this data breach and what information may have been hacked.

This is the second major data breach for Marriott in less than two years. In November 2018, Marriott International reported that one of their brands, Starwood Hotels, had been compromised by hackers. Beginning in 2014 the guest reservations system for Starwood hotels was breached and the data of about 500 million hotel customers was stolen. The Starwood data breach carried on for years before it was discovered. Marriott acquired Starwood in 2016, after the data breach began. Stolen data included 327 million passports as well as customer names, mailing addresses, phone numbers, email addresses, guest rewards account information, birthdates, gender, and travel dates.

Who Was Behind the Marriott Data Breach?

In December 2018 federal investigators at the US Department of Justice (DOJ) accused China’s Ministry of State Security of involvement in the Starwood Brands breach. The hack is believed to be an extension of a 2014 cyber attack on the US Office of Personnel Management.

Marriott Data Breach – What Do I Do Next?

Marriott International is offering free identity protection for those notified that they are impacted by the data breach. Customers must sign up by 30 June to take advantage of the service offered through However, IdentityWorks is only offered in Australia, Brazil, Canada, Germany, Hong Kong, India, Ireland, Italy, Mexico, New Zealand, Poland, Singapore, Spain, the United Kingdom, and the United States. Anyone else will need to protect themselves with an identity theft service that works everywhere. We recommend Identity Force – try a FREE TRIAL