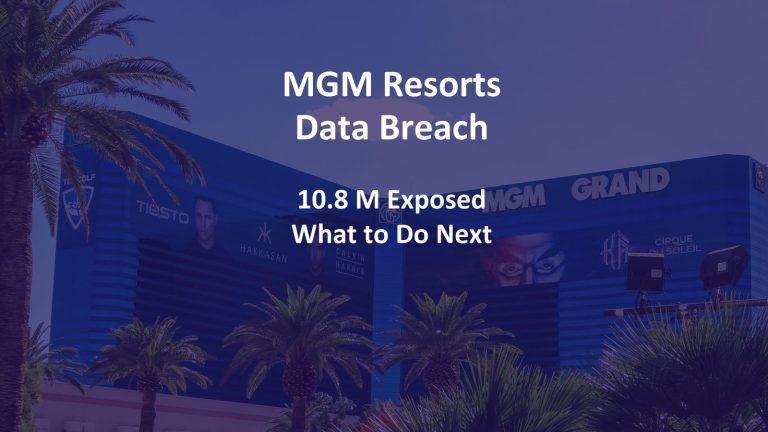 MGM Resorts Data Breach Hackers Dump 10.6 Million Guest Records Online – What Should You Do to Protect Yourself

The sensitive personal data of over 10.6 million hotel guests who stayed at MGM resorts was found online this week. Personal details of 10,683,188 MGM hotel customers including home address, full name, phone numbers, email address, and birthdate was exposed. For another 1300 guests, the personal data included driver’s licenses, passports, or military ID cards. It was reported the singer Justin Bieber was one of the millions of victims. The data was hacked in July 2019. Hacking groups GnosticPlayers is believed to be responsible for the cyberattack.

There are over ten million names on the list with some very high-profile people who also had their data hacked. According to ZDNet, Twitter CEO Jack Dorsey, singer Justin Bieber, Department of Homeland Security officials, Military, as well as Transportation Security Administration (TSA) officials are among those impacted by the data breach. Hundereds of thaousands of people come to Las vegas not only for the gambling but because it a major center for conferences and trade shows.

The MGM data breach is only a fraction of the size of the Marriot hotels data breach. In 2018 Marriot announced they had discovered a data breach that stole the information of over 500 million hotel guests. The data was stolen from the Starwood hotel chain that Marriot had recently acquired.

Although it is tempting to connect to free WiFi connections while you’re away from home can be tempting to use to save on data. Travelers often want to text their friends that they’re arrived or post photos on social media. Employees feel the need to reconnect with their office as soon as possible. Logging into any account while using public WiFi is always risky. Security when using any public network like that at hotels in Las Vegas is non-existent. But this holds true for any public WiFi connection. Even the WiFi in your hotel room is not secure from hackers and traffic sniffing. When you are checking emails, posting on social media, or logging into any online account your usernames, passwords, and anything else you typed in can be easily intercepted by hackers. This includes all of the photos, texts, and videos you send in private messages sent from the phone.

For most of the victims, the data posted online about them includes information that can be found in many places online already so it may seem like no big deal. No financial, payment card, or password data was stolen in the data breach but that doesn’t mean customers money is secure. But this is a treasure trove of information for further cyber attacks including spear phishing emails. Hackers often begin cyberattacks by going after less sensitive data to build a database of information about victims. That information can be used to send email scams, phishing emails, for tax fraud, or steal victim’s identity. When a hacker has specific information about a target, they can use that to craft personalized emails that sounds more convincing. When the victim feels they know the email sender or the content sounds familiar, they are more likely to follow the action that the hacker wants them to take – click on a link, download a file, visit a scam website.

Hackers send phishing emails, using information like job title, travel history, and names, scammed in data breaches. Phishing emails and targeted spear phishing emails are an especially common way for scammers and to gain access to high-value online accounts – like bank accounts and credit cards. If a hacker can gain access to an email account stolen in a data breach, they can use the email to reset passwords on any account that is attached to the email address. Since many people reuse the same password across multiple online accounts, a stolen email and password combination from a hotle loyalty account, may let the hacker into multiple other accounts.