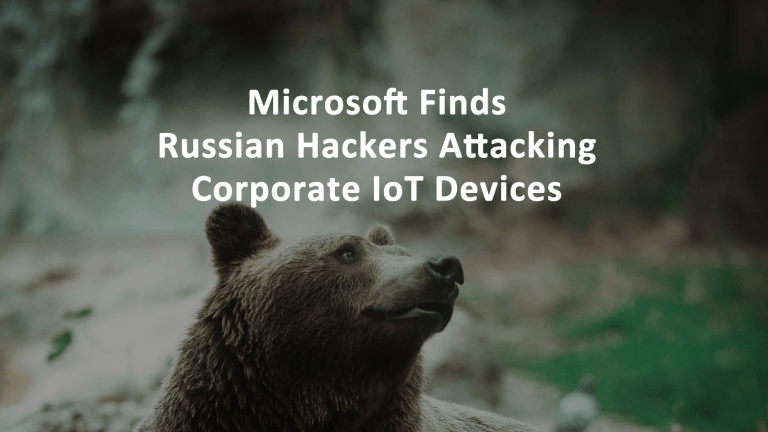 The hacking group attempts to compromise and communicate with IoT devices. Three insecure devices, voice-over-IP phones, office printers, and video decoder hardware were successfully hacked at multiple corporate locations. Once access was gained through these low-level devices, APT28 dropped malware that seeks out higher-level access on the network they are connected to.

According to Microsoft, “After gaining access to each of the IoT devices, the actor ran tcpdump to sniff network traffic on local subnets. They were also seen enumerating administrative groups to attempt further exploitation. As the actor moved from one device to another, they would drop a simple shell script to establish persistence on the network which allowed extended access to continue hunting. Analysis of network traffic showed the devices were also communicating with an external command and control (C2) server.”

What are IoT Devices?

The phrase Internet of Things, called IoT for short, refers to any internet connected device like printers, smart TVs, connected vehicles, printers, appliances, and lighting systems. Basically, IoT devices that make our lives easier or get things done for us. IoT devices are by design, easy to connect to the internet which is also what makes them an appealing target for hackers. Many corporate IT admins may not even know which devices have been brought in by employees and connected to their networks.

The Microsoft post cites that there will be an estimated 50 billion IoT devices in the world by the year 2020. Even now, the number of IoT devices online exceeds the number of personal computers and smartphones combined.

At least two of the cyber attacks were successful because the device owner did not change the manufacturer’s default password after connecting the device to the internet. A third device was not kept updated with the latest security patches.

Some IoT devices communicate basic telemetry back to the manufacturer or have a connection that allows it to receive software updates. Therefore they maintained and monitored for suspicious activity.

How to Secure IoT Devices

IoT devices are intentionally easy to connect to networks, making them especially vulnerable to hackers. Often, corporate sysAdmins are unaware a device has been connected to their network by an employee. Advanced Persistent Threat Groups and other hackers can take advantage of vulnerable electronic devices to gain higher-level access to a corporate network.