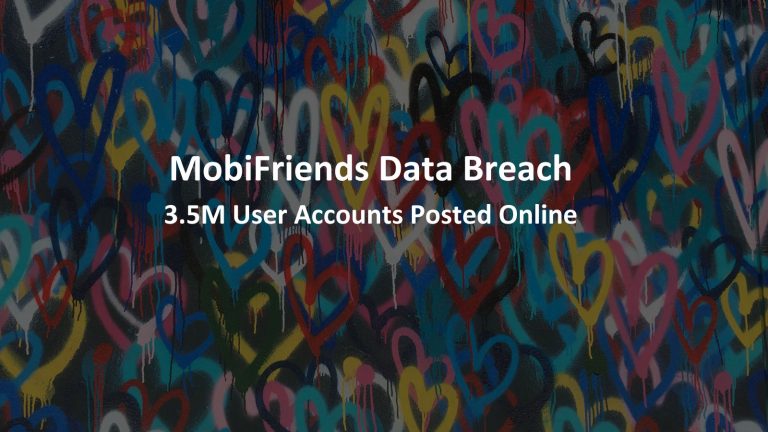 User data from the MobiFriends data breach is available for download on a dark web forum. The personal information of 3.5 million the dating app’s users was stolen last summer. It includes usernames and passwords. MobiFriends user data was originally for sale on the dark web but now is posted online where it can be downloaded.

According to a report by cyber security researchers at Risk Based Security (RBS) the stolen data includes email addresses for a number of Fortune 1000 companies including American International Group (AIG), Experian, Walmart, and Virgin Media. Compromised business email addresses can lead to a Business Email Compromise ( BEC) scam. This type of scam relies on social engineering and stolen data to send fraudulent requests for money transfers.

In March 2020, Shark Tank star Barbara Corcoran was defrauded out of $389, 000 in a BEC scam. Her accountant received a phishing email that appeared to be a request from an assistant to pay an invoice by wire transfer. Information for the attack was easy to obtain as Corcoran is high-profile figure known to invest in real estate. The money was sent, but with the cooporation of the receiving bank it was pulled back before the hackers could transfer it away.

READ: What is a BEC Scam?

The stolen MobiFriends data was offered for sale on the dark web in January. It was again posted on the same forum in April and can now be downloaded by anyone on the forum. The personal data is attributed to a July 2019 data breach.

Noprivate messages, images, or private content is included in the data breach.

MobiFriends is a dating app with more than subscribers. The company is based in Barcelona, Span.

The stolen credentials can be used on the MobiFriends login screen to compromise a user’s account. Although the passwords are secured with MD5 hash, they can be decrypted as this a weak encryption method. Even though no payment cards were stolen in the data breach, the accounts contain a wealth of sensitive information that can be used in spam and phishing emails.

Compromised phone numbers and email addresses can easily lead to future spear phishing attacks, financial losses, and identity theft.  In the case of identity theft, hackers can use the personal data to increase lines of credit or open new financial accounts. Since many people use the same password across multiple online accounts, including banking, a stolen password is a serious risk.

Because there are business email addresses involved in the MobiFriends data breach, BEC scams are also  possible. A BEC scam, formerly Man-in-the-Email scams, is when a hacker uses a business email account to steal money. This is often accomplished by sending fake invoices or requests for wire transfers. The money is sent to a bank account the hacker controls. BEC scams target executives, finance departments, human resource personnel or anyone who may be authorized to initiate payments.