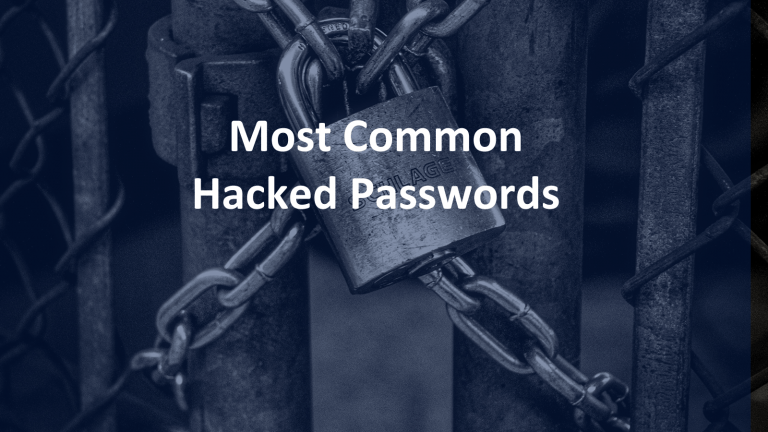 Analysis of the 100,000 most common passwords hacked globally was released in a report by Britain’s National Cyber Security Center (NCSC) The list is comprised of the top 10k passwords accessed by hackers. The hacked passwords were found to be involved in global cyber security breaches and are in circulation on the dark web. The list was released by NCSC in collaboration with the Have I Been Pwned website.

Analysis of the most common passwords reveals a concerning cyber security practice. Predictable reused passwords present a real security issue for online accounts. Passwords need to be difficult to hack, but not difficult to remember. Choosing consecutive numbers and letters are easy to remember but terrible for online security. Many online systems don’t allow consecutive letters or numbers, but it obvious from this data that millions still do.

Hackers use repositories of common passwords, dictionary words, sports team names, and cities along with computer programs to brute force hack at login credentials. If a hacker has your email address, then they only need to use a computer algorithm to work toward gaining more access. Online credentials can be gleaned from social media accounts or from sniffing WiFi traffic. In a social engineering attack, hackers can scrape user password reset questions – like hometown and pet names – to reset your password.

The NCSC data was collected from a phone survey of the general public from November 2018 to January 2019. The survey found that 70% of respondents believed they would be a victim of a cyber crime within the next two years. Protecting their privacy was a concern for 51% of those surveyed while 52% were concerned about preventing their money from being stolen online. However, 46% found that information on how to be secure online was confusing with only 15% saying that they understood a great deal about how to protect themselves online.

If you see a familiar password on this list, change it immediately. Developers can use the list to set up a system to ban them from the authentication process. Do not reuse passwords across multiple accounts. For example, don’t use the same password for your email as you do for your online banking.
Publishing this list of hacked passwords does not help hackers. The list was already out there on the dark web accessible by anyone who knows how to get to it. So, releasing the list makes no difference.

Password re-use is a major cyber security risk that can be easily avoided with a little awareness and effort. Creating strong passwords also takes a little more effort, certainly more than using something as weak as password123 or the first six numbers on a keyboard. People names, bands, and sports team names are also common passwords that should not be used, even when coupled to strings of numbers. Blink182 was the most common band name seen on the hacked password list. Ashley and Michael were the most commonly used names.