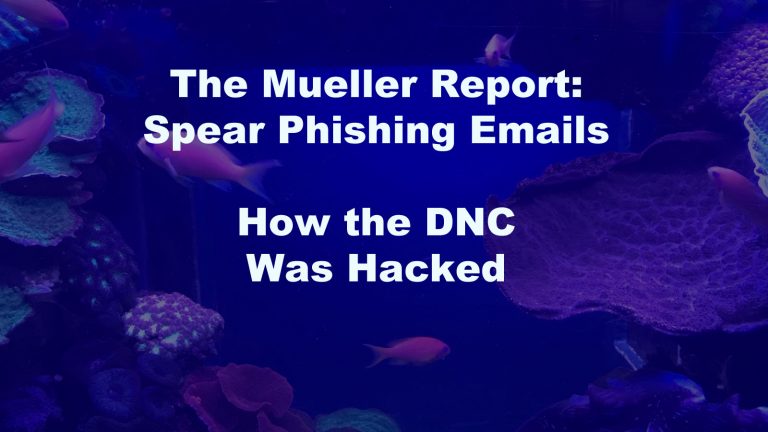 The Mueller Report – How the Russians Hacked the DNC

The famous Mueller Report is out and if you are working your way through the redacted version, then you should have come across the section on Russian interference with the 2016 US Presidential election. This interference involved multiple cyber security attacks. The vectors come from a few different Russian Army Units and involve custom malware as well as hundreds of email spear phishing attacks. It was no secret that the spear phishing attack snagged the login credentials of Clinton Campaign chairman John Podesta as well as passwords from Democratic IT workers.

The Report On The Investigation Into Russian Interference In The 2016 Presidential Election, Volumes I and II, by Special Counsel Robert S Mueller, III are collectively and affectionately known as the Mueller Report. The deep dive into the various cyber security attacks during the 2016 US Presidential election, Trump versus Clinton, and how much Russian interference went on begins on page 36 of the Mueller report, Volume I. A redacted version of the Report was released to the public by the Department of Justice on April 18, 2019.

The Russian intelligence service is known as the Main Intelligence Directorate of the General Staff of the Russian Army or GRU. The Mueller Report explains that GRU began hacking the email accounts of Democratic Presidential candidate Hillary Clinton’s campaign workers – both volunteer and employees in the spring of 2016. The most infamous infiltration was the successful breach of Clinton campaign chairman John Podesta’s email. The Russian GRU also hacked the IT systems of the Democratic Congressional Campaign Committee (DCCC) and the Democratic National Committee (DNC). With access to email accounts and the IT system, GRU stole hundreds of thousands of documents, according to the Mueller Report. In June 2016, the GRU released hacked documents through DCLeaks, and Guccifer 2.0. In July 2016, hacked documents were also released through WikiLeaks with Podesta’s emails being released later in October 2016.

One GRU Unit infiltrated US targets with malware, while another GRU Unit launched spear phishing campaigns. According to page 37 of the Mueller Report, Volume I, GRU Unit 26165 hacked the DCCC and the DNC along with the email accounts of Clinton campaign workers. GRU hackers sent hundreds or targeted spear phishing emails and were successful at tricking recipients into giving up login credentials.

What Is a Spear Phishing Email?

Most are familiar with the term phishing email. That’s an email sent to hundreds or thousands of email accounts. Phishing emails ask, or fish (phish), for more information. The goal is to get the recipient to give up some persona data or financial information. A common phishing email tactic asks the user to respond to the email and simply enter in bank account or credit card details in the reply email. Another frequent phishing email strategy encourages or even threatens the recipient to click on a link in the email. Clicking the link takes the reader to a website page that prompts, or phishes, for more information. The users could be asked for personal data like birthdate, government ID numbers, or credit card numbers. The user might also be asked to reset a password as they were in the case of the Clinton campaign phishing attack. Of course, because the website was a spoofed website, no one was resetting their passwords, they were giving them to the hackers.

How Did the Russian GRU Spear Phishing Attack Work?

Russian GRU officers sent spear phishing email to Clinton campaign workers email addresses. This included official campaign emails associated with the candidate’s website, hillaryclinton.com. It also included spear phishing attack on Gmail accounts used by campaign workers. The emails were targeted at employees of the campaign at all levels as well as volunteers. Campaign chairman John Podesta and junior volunteers on the advance team were also targets. Access to a DCC server was gained by successfully spear phishing a DCCC employee and stealing login credentials.

How Was John Podesta’s Email Hacked?

Podesta was spear phished successfully. Russian hackers sent Podesta a spear phishing email on March 19, 2016. The email appeared to be a Google security alert and contained a shortened link that supposedly would secure his account. Podesta clicked on the link and it led him to a spoofed website that directed him to confirm his email credentials. Once he entered his email account and password, the hackers had access to all his emails. True, Podesta did forward the phishing email to the IT department asking for help. But IT responded incorrectly to the incident and marked it as “legitimate.” That employee later said that he meant to mark it as illegitimate.

Over 20,000 pages of Podesta emails were subsequently release by WikiLeaks in October and November 2016. Podesta and the Clinton campaign never spoke to the authenticity of the emails.

How to Tell If an Email is a Phishing Email

If you think you may have a phishing email or a spear phishing email – don’t do anything. Do not open the email (if you haven’t already). Don’t click on any links and don’t forward it to anyone but your IT department. Obviously, if you receive a phishing email at your personal email address, you don’t have an IT department to send it to. When I receive Amex phishing emails I send it to their IT department. If you can, telephone the person who supposedly sent it. If it’s not from someone you know, then mark it as SPAM and delete it. If you are concerned that this email is from a legitimate company or person, just go straight to their website and find contact information there.

Read our guide on how to spot a phishing email.