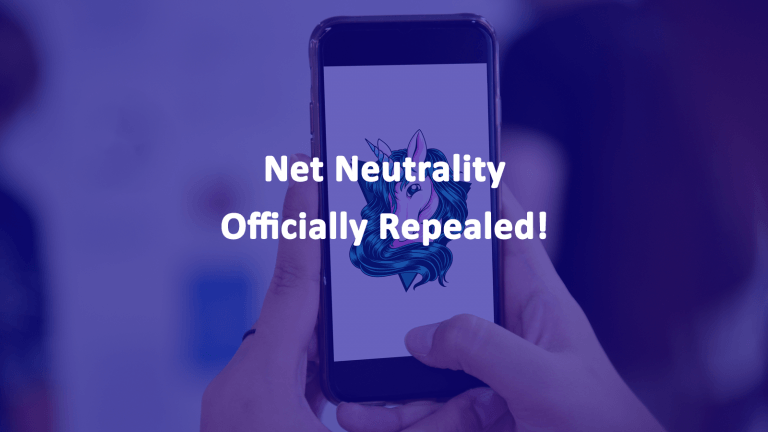 Net neutrality was officially repealed today. The Federal Communications Commission (FCC) ruling, known as “Restoring Internet Freedom,” was entered into the Federal Register today. This is the final step in pulling back regulations on the Internet Service Providers (ISPs.) Up until today, the repeal was not quite official. However, the effective date of the law is not until April 23, 2018.

Net neutrality is the concept that ISPs should not be allowed to favor or throttle broadband (internet) traffic using their infrastructure. This means that they had to give all traffic sources – like Netflix, website surfing, and voice over IP phone call, the same treatment.

Without Net Neutrality rules in place, ISPs can choose to slow down or charge for broadband traffic as they see fit. For example, my ISP is Verizon. They supply the internet access to my house, business. They are also my cell phone service and television service. I also have a Netflix subscription and my son is on Xbox every day.
The Federal government now feels that ISPs should be allowed to speed up deliver, slow down or limit (called throttling), or shut off certain content all together.

What is an ISP?

ISP stands for Internet Service Provider. This is the company you pay for internet access to your home or place of work. Verizon and Time Warner are examples of major ISPs. Before net neutrality was repealed they had to treat all use of their hardware and wiring by content providers like HBO, Netflix, Google, and millions of random small websites equally. Meaning the no traffic could be sped up or slowed. And they could not charge extra money for use of their broadband network.

Why Would an ISP Slow Down Internet Traffic?

An ISP could charge more money for use of their system. They may also charge money to those services they view as competitors. For example, Netflix sells movies and their own series of shows. Verizon and Time Warner also sell movies through their on-demand services. That makes Netflix a direct competitor of Verizon and Time Warner (as well as any other ISP that sells movies.)

Have you ever rented a movie from your cable TV provide and been mad because it keeps buffering because it is being served too slowly during peak viewing times? Well, if your cable TV provider slowed down delivery of your movies from their competitors? Then you would be mad maybe to the point of cancelling their service. what It makes sense that an ISP might be tempted to slow down service

“As a result of the mess the agency created, broadband providers will now have the power to block websites, throttle services, and censor online content. This is not right. The FCC is on the wrong side of history and the wrong side of the law and it deserves to have its handiwork revisited, reexamined, and ultimately reversed.”