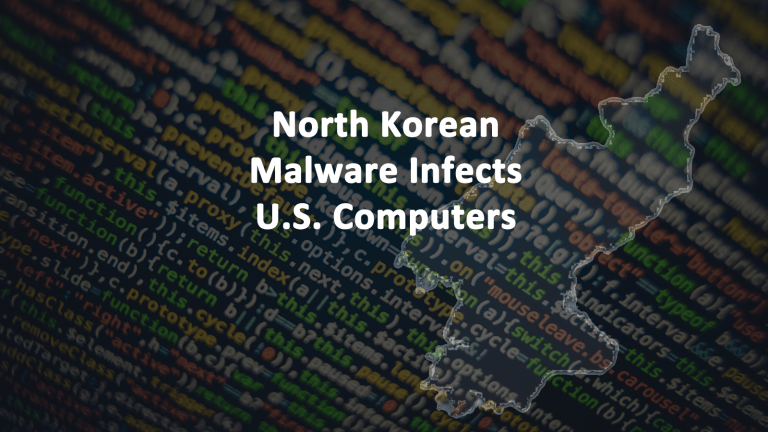 North Korea launched a malware cyber attack and the US Department of Justice (DOJ) announced it is working to notify victims in the United States who have infected computers. The devices are infected with malware used by North Korea to expand its global Joanap botnet. The FBI also is working with foreign governments to notify victims in their countries.

The DOJ issued a search warrant that gives the FBI and the Air Force permission to sinkhole malware infected machines and help them and map the botnet’s reach.

Joanap is a large scale North Korean cyber attack vector that uses malware to infect and take control of Windows machines. The North Korean state-sponsored cyber attack uses malware to set up a global computer network. The malware gives its North Korean hackers admin access that enables them to infect more machines and IT systems. Infected computers are known as peers or bots. When working together as part of a hacked infrastructure, the compromised machines are collectively referred to as a botnet.

Joanap Botnet is a worldwide network of computers infected with malware from North Korean hackers. The infected computers are then used for other malicious cyber activities. Joanap botnet was identified years ago. Joanap is malware that is often dropped by the Brambul worm. Brambul crawls machines over the internet seeking access where it can exploit known vulnerabilities and unpatched computers. Once installed, Joanap allows its North Korean hackers to give themselves admin access and control the infected computers. Like a lot of malware, Joanap downloads even more malware onto infected computer and works to further its reach.

What Is A Sinkhole in Cyber Security?

A DNS sinkhole, also called a sinkhole server, internet sinkhole, or Blackhole DNS, is a standard domain name server (DNS) that gives out erroneous information. When visiting websites, computers go to DNS servers to retrieve the address of a website. The DNS server answers with the address of the website files so your computer may go and fetch the webpages. Sinkholes can be used to intercept the DNS services of malware and their botnets. When the sinkhole receives a request for a domain name used by malware, it gives out a false answer. This is a method of capturing and stopping malicious internet traffic. It is also used to curb adware by giving the requesting computer a false server address. The sinkhole requests are analyzed to understand the extent of nature of the malware.

What is a Botnet?

A botnet is a robot network. A botnet is a network of Internet-connected devices, hardware, and computers infected with malware. Hackers control the infected network as a group and use them to distribute malware, send spam, deploy ransomware, or commit other cyber attacks.

What Should I Do If My Computer is Infected with Joanap?

Joanap botnet can be removed with the use of a good antivirus application. Internet users should be vigilant and keep their machines updated with the latest software to help prevent malware attacks like this one.