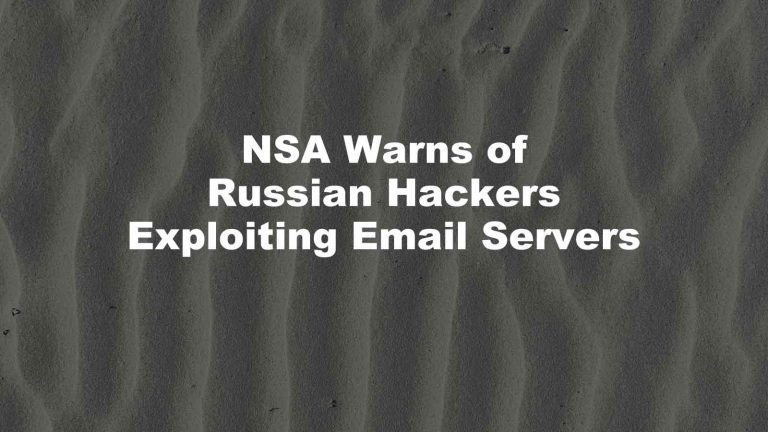 The National Security Agency (NSA) has released a cyber security advisory on Russian advanced persistent threat (APT) group. The advisory states that a Russian nation-state hacking group has been exploiting a known vulnerability since August 2019. The hackers, referred to as Sandworm, are exploiting CVE-2019-10149 to attack email servers.

The vulnerability referred to as “Return of the WIZard” allows hackers to send malicious emails to unpatched Exim servers and run malicious code under the Exim process’ access level, which is usually root on most servers. Exim servers run just over half the email servers in the world.

Due to a security flaw, improper validation of the email recipient’s address can lead to remote command execution. Although a security patch was released last summer, Sandworm hackers started exploiting CVE-2019-10149 two months later. The NSA advisory states, “Although Exim released a security update for the MTA vulnerability in June 2019, Sandworm cyber actors have been exploiting this vulnerability in unpatched Exim servers since at least August 2019.”

READ: What is Fancy Bear?

The Russian Federation sponsored hacking organization referred to as Sandworm is exploiting a security flaw in Exim mail transfer agent (MTA) according the NSA. The exploit can be used to send a maliciously crafted email to execute commands with root privileges. The vulnerability allows hackers to install programs, modify data, and create new accounts on the server. Sandworm has been able to gain full access to compromised servers and the databases on it.

Exim is a mail transfer agent application for Unix based networks. It is usually preinstalled on Debian installations.

Return of the WIZard  is listed in the National Vulnerability Database (NVD) of Common Vulnerabilities and Exposures (CVE) as CVE-2019-10149 and is severe.

“The actors exploited victims using Exim software on their public-facing MTAs by sending a command in the ‘MAIL FROM’ field of an SMTP (Simple Mail Transfer Protocol) message,” the NSA says.

Sandworm is a name given by the US government to advanced persistent threat group 28 or APT28. It is associated with the Russian military. Advanced persistent threat groups are given monikers by various cyber security research agencies and tech corporations so as not to offend the governments in countries where they work. Sandworm is also known Pawn Storm, Sofacy Group Sednit, Tsar Team, STRONTIUM, and Fancy Bear. The United States Special Counsel, Estonia, and the United Kingdom identify Sandworm as two Russian military intelligence (GRU) units Unit 26165 and Unit 74455.

Sandworm targets that are of interest to the Russian government – generally NATO aligned nations – with  espionage campaigns, doxing, and disruptive cyber attacks. APT28 is responsible for hacking the US Democratic National Convention, the German federal Parliament Bundestag, the compromise of U.S. Anti-Doping Agency, the attack on the World Anti-Doping Agency, BadRabbit malware attack, among other very high-profile attacks.

Over two million of unpatched email servers are still vulnerable to attacks To prevent attack by Sandworm or other hackers exploiting CVE-2019-10149 NSA Exim servers by installing version 4.93 or newer.