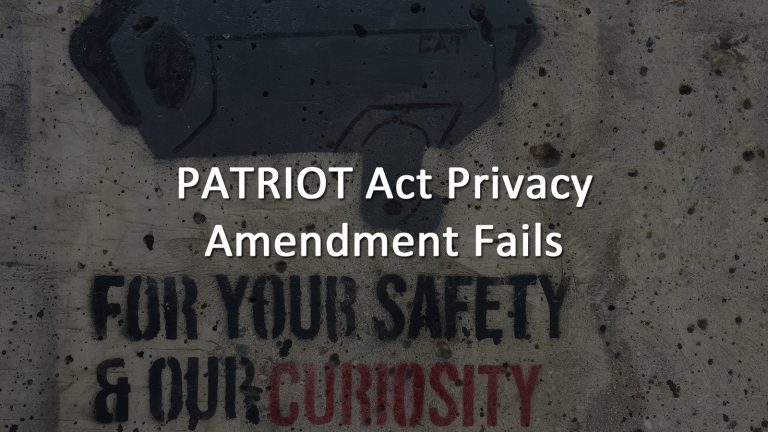 The Patriot Act is a law that provides sweeping surveillance powers

The Patriot Act is a law that provides sweeping surveillance powers to the United States Federal government in the name of discovering and preempting domestic terrorist threats without the traditional oversight required to use the incredibly invasive tools at the government’s fingertips. Passed following the horrific tragedy of 9/11 the Patriot Act, whose full name is actually the Uniting and Strengthening America by Providing Appropriate Tools Required to Intercept and Obstruct Terrorism Act, is a sweeping bill that provides for more than just government surveillance powers and several parts of it have been struck down as unconstitutional, such as the indefinite incarceration of an immigrant without charges which is obviously a massive violation of the Constitution. The Patriot Act was designed to provide additional tools tailored to respond to the unconventional dangers created by terrorist threats.

Traditionally, it would be difficult to detain, question, or search someone who had yet to actually commit a crime. After all, the United States judicial system is built on the concept of “innocent until proven guilty” and a variety of the government’s investigative measures, such as access phone records, only become available after a judge has been shown enough evidence to convince them that your innocence is in doubt. However, how does that work in a world where highly motivated individuals refuse to cooperate, and the intelligence data that exposed them comes from human sources, which might be lying? This is where the Patriot Act steps in, it allows law enforcement agencies to get access to records that they suspect may be involved in a terroristic plot, not someone they know is involved in one.

There is an ocean of difference between suspecting that an individual may be involved in something vs actually having the evidence to show that you know they are, and in the wake of 9/11 the US government traded on its people’s fears to provide itself greater access to its citizen’s records. This overreach went largely unnoticed until Edward Snowden revealed that the government had been collecting the records of pretty much everyone in the United States through its PRISM project. While the various administrations have asserted that the Patriot Act has been useful in combatting terroristic threats, an oversight study run by the government’s Privacy and Civil Liberties Oversight Board in 2014 disagreed with that analysis. They found that there wasn’t a single instance of intelligence gathered by the Patriot Act made a difference in the outcome of a terrorism investigation, as the content of the data collected through the Patriot Act had already been received from a different source. Further, they found no instance where the information provided from the Patriot Act directly contributed to halting an unknown or novel terrorist threat.

These findings, published in 2014, make it all the more unsettling that a motion to insert privacy restrictions into the Patriot act were struck down today in the Senate, where they failed by just one vote.