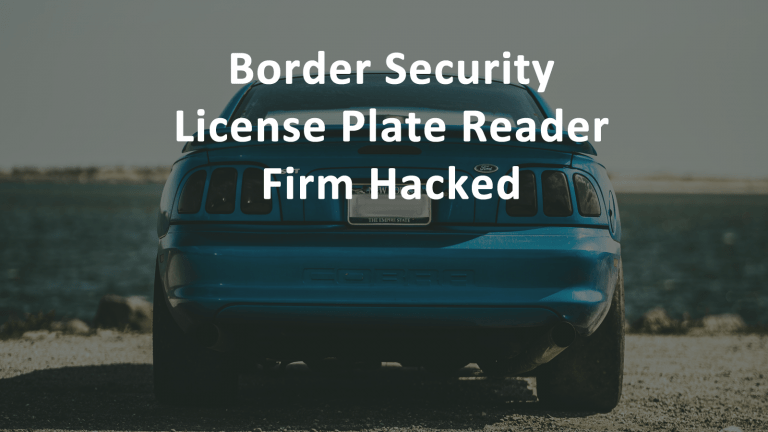 Perceptics sells license plate readers (LPRs), license plate recognition systems, and vehicle identification products. The company’s license plate readers are installed at all land border crossing lanes between the United States, Canada, and Mexico to monitor privately owned vehicle traffic as automobiles cross into and out of the United States. Government clients include the US Department of Defense, US Department of Justice Drug Enforcement Administration, US Border Patrol, Singapore Customs, Canada Border Services Agency, US Social Security Administration, US Air Force, and the city of Abu Dhabi. Within the United States, Perceptics technology is used by state departments of transportation including Oklahoma, Alabama, Florida, Wisconsin, Idaho, and Oregon.

The company confirmed the cyber security incident. Perceptics is the most-used automobile license plate reader manufacturer in the United States. License Plate Recognition cameras originated in Europe where they are referred to as Automatic Number Plate Recognition (ANPR). In North America, automobile tags are called “license plates” rather than “number plates” as they are called in Europe.

Perceptics LPRs scans automobile license plates with read rate accuracy of 95% or more. According to their corporate website, Perceptics technologies are also used for:

About 65,000 files with hundreds of gigabytes of data were hacked. Evidence of the data posted on the deep web and sent to The Register website. File formats include Microsoft Excel xlsx files named after locations and postal codes. There .jpg format image files named for “driver” and “scene.” Other files are Microsoft Word files .docx files associated with government agencies like U.S. Immigration and Customs Enforcement. Other files are database files, HTML pages, and other image formats.

Yes. The majority of police agencies in the United States use some form of LPR. License plates may be compared to databases including identifying wanted felons, AMBER Alerts, missing persons, recovery of stolen vehicles, locating gang member, and apprehending known and suspected terrorists. LPR technology is also used for electronic toll collection.

While license plate readers have many legitimate law enforcement duties, data is being stored about millions of innocent citizens. In July 2012, the American Civil Liberties Union sent public records act requests to over six-hundred police agencies. The findings reported that LPRs capture much more than license plates at border crossings and contain a lot of personal data on the whereabouts of innocent citizens in their daily lives. This stored data can include video surveillance of private buildings, passengers in automobiles, attendance of religious meetings, and visits to private businesses.

How Do License Plate Readers Work?

License plate readers can be mounted on police cars, attached to roadside poles, or stationary objects like bridges. LPRs readers capture an image of the license plate number of a car and the date, time and location. They are not used to issue speeding violations. However, they are used to apprehend criminal suspects.

Perceptics recently announced that “a key contract by US Customs and Border Protection to replace existing LPR technology, and to install Perceptics next generation License Plate Readers (LPRs) at 43 US Border Patrol checkpoint lanes in Texas, New Mexico, Arizona, and California.”