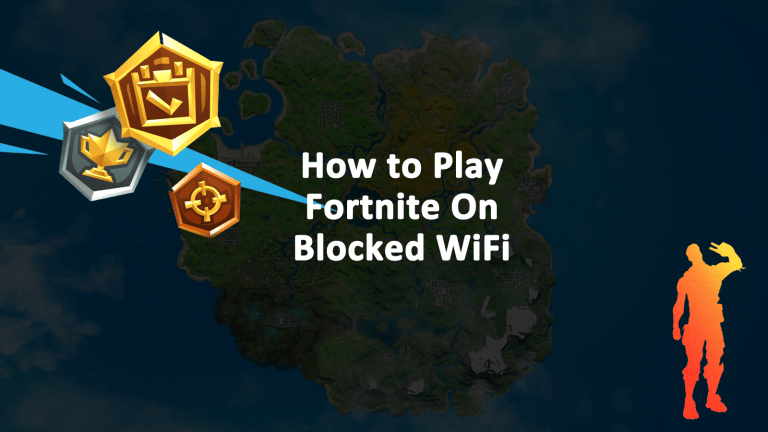 To play Fortnite on blocked WiFi, like that found at school or work, you need an app to route your phone’s data and WiFi connection to make it look like it’s coming from outside the building. School system administrators block Fortnite and other games, streaming sites like Netflix, social media apps, and certain websites from students while they’re at school to keep them doing things other than school work. A VPN, or virtual private network, can be used to reroute your phone’s connection and circumvent the system administrator’s firewall rules so you can play Fortnite on blocked WiFi, access any blocked apps, or censored websites.

Keep in mind that sometimes websites are blocked for good reasons. Websites can be spoofed, infected with malware, used to spread ransomware that locks up your device, or used as cryptocurrency mining. So be careful about what websites you visit and use a good antivirus app too.

Although it may take an extra step, be careful to download apps from official app stores like the Apple Store or Google Play. Never download a new game from within a game. You can also download an app from the creator’s official website if you’re absolutely sure you’re on the legit website. Sometimes you need to download from outside an app store to access certain features that are not allowed. For example, you must download IPVanish right from their website because Google Play restricts certain useful features that are totally legitimate.

How to Use a VPN To Play Fortnite On Blocked WiFi

You should be able to play Fortnite on your block WiFi connection because your VPN routes your web traffic outside the building.

Will my school know I’m using a VPN?

Yes, your system administrator will be able to see that someone is using a VPN if they actually read their log files. However, unless you gave them your device ID, they won’t know that if you are using the VPN. This SysAdmin will not be able to see that you’re playing Fortnite at school or whatever else you looked online while connected to your VPN app.

How Students Can Use VPNs to Play Fortnite on School WiFi

Students have learned that VPNs provide an easy way to play Fortnite on school WiFi. VPNs are used to circumvent school firewalls and router rules that block social media apps such as Snapchat and Instagram and prevent students from playing games like Fortnite or watching Netflix. VPNs can be downloaded for free although free versions usually come with bandwidth restrictions, throttling, and low data limits.

VPN stands for virtual private Network. A VPN is an app that you download 3 laptop phone, or desktop computer. When you use the VPN app it routes your internet traffic two other locations or countries using servers provided by the VPN.

When you use a virtual private Network no one, including your internet service provider (ISP), can see the information that you’re looking at online. The contents of emails cannot be tracked. The websites you visit and apps you use remains anonymous as long as the VPN is not retaining log files.

Even if you don’t want to use the VPN for playing Fortnite at school or work, a VPN provides a layer protection anytime you’re using public WiFi like that found at coffee shops, hotels, airports, and in stores. A VPN stops hackers and any other unauthorized users from intercepting your device’s web traffic, data, account usernames and passwords when you’re using any WiFi connection.

Even something simple like logging into a game to play Fortnite or social media account to post a photo, can give a hacker enough information to steal your money. People often use the same password and email address for multiple accounts. Using a VPN can stop a scammer from getting into your email and block them from stealing payment information or account logins.

Epic Games owns Fortnite which is an online video game released in 2017 in two modes, Fortnite: Save the World and Fortnite Battle Royale. A third distribution, Fortnite Creative was released in 2018. Fortnite Battle Royale is by far the most successful of the three modes. The games has over 250 million players worldwide and is available for Windows, macOS, Nintendo Switch, PlayStation 4, Xbox One, iOS, Android devices. Forty percent of Epic Games is owned by Tencent.