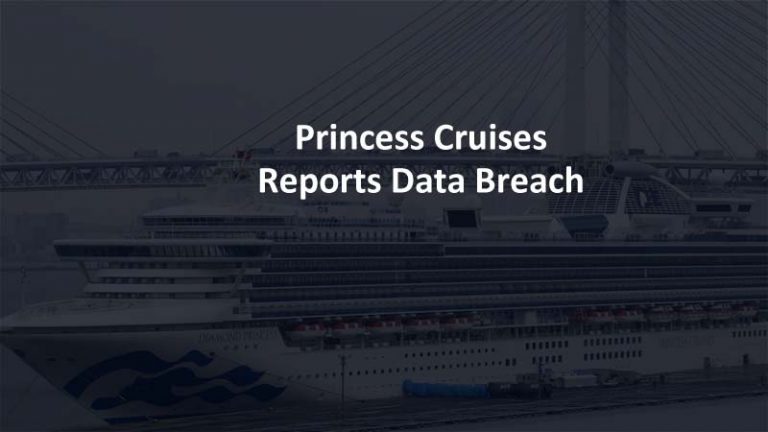 Princess Cruises, a cruise line owned by Carnival Cruises, suffered a data breach. Hackers breached employee email accounts over a four-month period and stole personal information belonging to employees, crew, and guests. Princess Cruises is the same cruise line that had two ships on which passengers were infected with the Coronavirus. The first ship, the Diamond Princess eventually docked in Japan with over 700 ill passengers.

Hacked data includes passenger names, addresses, Social Security numbers and government IDs, payment information, and health data. The press release stated that, “This list is not specific to each guest, “ but it is not clear what that exactly means.

The data breach was reported to police, but Princess Cruises did not indicate in what jurisdiction or agency they had reported the breach in. Princess Cruises stated it is using cyber security investigators, but they did not say if it was a third-party company, as is customary in data breaches, or name anyone who is in charge of the investigation.

Hacked data can be used for a variety of cybercrimes including credit card fraud, stolen money, tax fraud, or identity theft. Hackers can use the stolen government ID information to open up lines of credit, produce false ID cards that are sold. They can even use them in medical fraud. Payment card numbers are used to clone physical payment cards to run up charges. They can be sold on the dark web to other hackers.

Recently a cache of thousands hacked payment card numbers was put up for sale on the dark web by a hacking group known as Jokers Stash. The stolen credit cards were part of the five-month long Wawa data breach in which hackers infected the point-of-sale terminals with malware to steal all payment information used by customers at all Wawa stores.

Princess Cruises has already ceased operating after two of its ships, Diamond Princess and Grand Princess, had outbreaks of the novel coronavirus, or COVID-19. The cyber attack on the company’s email accounts occurred between April and July 2019.

Princess Cruises Data Breach – What Do I Do?

If your money or identity is stolen, file a report with the police. You can also report the theft to your bank and any payment cards that were compromised.

Get a Free Copy of Your Credit Report